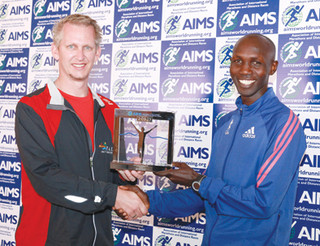 Wilson Kipsang received the AIMS World Record Award in recognition of his world record breaking run in the BMW Berlin Marathon on 29 September 2013.

His achievement, after ratification of the record, was acclaimed at a presentation on 13 February in Ras Al Khaimah (UAE), where he was a guest of honour at the Half Marathon run the next day. The presentation was made by Race Director of the RAK Half Marathon Nathan Clayton.
Kipsang (31) improved the men’s world Marathon record by 15 seconds when he recorded 2:03:23 in Berlin. The previous record had been set by Patrick Makau, also in Berlin, two years earlier. His victory was the seventh marathon win of his career.

This is the second AIMS award to be received by Kipsang. His world record performance was enough to top the poll for the AIMS Best Marathon Runner Award on November 2013 at the AIMS Gala Dinner sponsored by OPAP in Athens, Greece.

Nathan Clayton said: “I am delighted to be able to present this award to Wilson on the occasion of the Ras Al Khaimah Half Marathon, where he set his personal best in the half marathon.”