Revival of centuries-old race with links to the ancient world 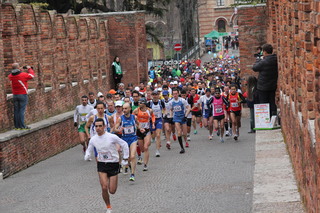 The Palio Del Drappo Verde in Verona is the longest held foot race anywhere in the world: this year it is run for the 600th time but it dates from 800 years ago as it was stopped in 1798 and was only revived in 2008.

The race shows the continuity with the Ancient World, it documents how foot races operated in the Medieval world, and why such an event continued and survived for so many centuries.

The traditions of the Verona Palio races, like others held in Italian towns in the Medieval period, are believed to be rooted in ancient games possibly dating back as far as 500 BC to when the Etruscans dominated northern Italy.

Festivals including many kinds of physical activities were part of Etruscan culture and variously might involve goading buffaloes (suggesting an early form of bullfighting) and long hazardous races both on horseback and on foot. Etruscan art shows athletes competing for prizes in foot races.

Over a thousand years later Palii events featuring horse races and footraces took place in towns such as Asti, Padua, Ferrara and Bologna, as well as in Verona. They were made possible by the wealth and freedom that existed in Northern Italian cities and by the competition between them. Many cities had become self-governing and broken away from feudalism.

The “Palio del Drappo Verde” foot race celebrated the victory of the Verona City Republic over the Counts of San Bonifazio and the Montecchi family. The race reputedly dated from 1207 or 1208 and it is most likely that 1207 was the date of the battle and 1208 the date of the first race.

It was modelled on an earlier horse race dating back to 1198 and using the same course, but was open to a wider populace. The Verona race is unusual in focussing on the footrace while palio events elsewhere were usually dominated by horse racing.

The name ‘Palio del Drappo Verde’ comes from the prize that was awarded to the winner. ‘Palio’ comes from the Latin word Pallium meaning a rectangular piece of cloth. Marco Polo’s journeys in China led to an ever-increasing use of silk in Western Europe. As early as the twelfth century Venetian merchants traded extensively in silk and encouraged silk growers to settle in Italy. By the 13th century Italian silk was a significant source of trade but was still very much a luxury and the prize of silk cloth would have been much sought after.

A significant reason why the Palio del Drapo Verde was held over so many centuries is because the requirement to hold it was incorporated into Verona law. The Statuto Albertino of 1271, compiled for Alberto della Scala, stated that two races were to be held on the first Sunday of Lent: a horse race and a running race.

The Albertino codex of laws was re-established by Cangrande I in 1328 and details of the prizes were made more specific. A green palio (cloth) would go to the winner of the footrace and a rooster to the last runner.

The Statuto by Giangaleazzo Visconti, approved in 1393, prescribed a race for women. The men would now seek to win a red cloth while the palio verde for which they had previously competed would go to the women’s winner. As in the men’s race the slowest woman would receive a rooster. The Statuto specified that the race was open to “honest women, even if only one is to participate; however, if no honest women are available, then prostitutes would run.”

The male runners traditionally ran naked. This was probably a link to the ancient Etruscan games, where athletes ran naked to make it impossible for opponents to grab at their clothing and pull them back. The races were far more robust and combative than is permitted under modern rules. It is not known whether the women ran naked but contemporary paintings of similar palios show women runners wearing clothes.

From 1207 until 1450 the races were held on the first Sunday in Lent but from 1450, after Verona came under the control of Venice, it was held on ‘Fat Thursday’ — the Thursday before Ash Wednesday. This is the traditional time for staging carnivals and eating well before the restrictions of Lent set in. The Palio races were an integral part of these celebrations.

The cooler conditions at this time of year were preferable to the heat of an Italian summer for the runners but there was a greater chance of wet conditions. A report on a mid-fifteenth century race in Pienza records that: “There had been a light rain and the track was slippery. They ran naked and now one, now another was ahead and often one or another could be seen to slip and fall and roll on the ground and mud and those who had been last were now ahead.” So the event would often have been more like a muddy cross country run than a road race, particularly because an open sewer would run down the middle of each street.

Fat Thursday and its carnival was a celebration for the whole community of Verona and its townsfolk were involved in the Palio itself. The losers had to tour the town, showing off their consolation prize. The last horseman would cross the city with the leg of pork tied around his horse’s neck. Under the race rules anyone could legally cut the rope and take the leg of pork.

The last runner would likely have been expected to lead his reluctant rooster through the streets by a piece of string for the entertainment of the townsfolk. Any prankster would be able to cut the string and free the fowl, which presumably would lead to free-for-all chase to capture it.

The length of the Verona footrace race is documented but the course could be changed by the podestà, the local noble executive officer that held the city’s administrative powers.

According to Indro Neri’s detailed article the course would start from the Tomba neighbourhood (but later from the Santa Lucia neighbourhood) and would wind along the city walls south of Verona, running by the Porta al Palio. Runners would then head back to Verona, passing under the Arco dei Gavi and continuing along Corso Vecchio (the old main street) to reach the Palazzo della torre a San Fermo. Later the course would cross the current Corso to finish in piazza di Sant’Anastasia at a column called “La meta”. The horse race was held on the same course and was of the same length as the running event. Verona resident Stefano Scevaroli estimates it would have been at least 7km and perhaps over 10km. Much of it is still in existence.

As silk gradually became less of a luxury, with maritime trade routes opening up to the east and the development of the European silk industry, the intrinsic value of the Drappo Verde became less important but its symbolic value increased. By the eighteenth century the foot race in Verona was likely similar to the modern-day Palio horse race at Siena; a contest between runners from different parts of the city for a painted silk banner.

The Verona Palio footraces were held until 1797 when the Venetian Empire was conquered by Napoleon. Venice became part of the Austrian-held Kingdom of Lombardy-Venetia. The Austrians took control of the city on 18 January 1798. Venice and the cities of the former Venetian Empire fell into decline.

The French Revolutionary movement was strongly anti-clerical. Religious celebrations and carnivals would have been discouraged. Those Napoleon brought to power in Verona would have thought them old-fashioned and potentially subversive. Carnival celebrations and Palio races were no longer acceptable, and long-held traditions were suppressed or simply allowed to disappear.

The Verona Palio race lasted 590 years. It was run far more times than any other distance race known — but it did not stop there. In the first few years of the 21st century the Siena Palio horse races were notably successful in attracting tourists to the city and in 2007 it was suggested that perhaps Verona should consider reviving the Palio del Drappo Verde to the same end. City races all over the world had proven very successful in promoting and developing a distinctive identity for their host cities.

The Palio Del Drappo Verde was revived in 2008 and on ?? June was run for the 600th time, 800 years after the first time it was staged. The world’s longest running footrace has resumed its remarkable march into the future.