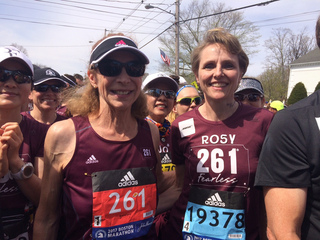 BOSTON - Women’s marathon legend Kathrine Switzer (left, No. 261) and 261 Fearless team member Rosy Spraker, (bib 19378) of Lorton, Virginia, were lined up for the start of the 121st Boston Marathon today at Hopkinton, Massachusetts. Switzer, 70, was celebrating the 50th anniversary of her historic 1967 run when she became the first woman to wear and official bib number and finish the Boston Marathon, considered by runners around the world to be the most prestigious of all races. Switzer was running with hundreds of women and seven men who are members of her 261 Fearless organization which encourages participations and inclusion in the sport of running.
Photo: Horst von Bohlen

Legendary marathoner Kathrine Switzer crossed the finish line of the 121st Boston Marathon today to tremendous cheers amidst a massive media contingent of photographers and TV cameras as she celebrated the 50th anniversary of her trail blazing run in 1967.

In the 1967 marathon race director Jock Semple attempted to stop her participation and tear off her “official bib No. 261” at a time when women were not permitted to run in the most prestigious marathon in the world.

Switzer celebrated the marathon weekend with friends and her loyal community but also by presenting her “261 Fearless” organization, a not-for-profit with increasing global reach established to encourage women to take on their challenges while utilizing the sport of running while creating lasting bonds with their peers.

“I can’t thank the people on the streets of Boston enough. I am so grateful for being able to run the Boston Marathon 50 years after my first one,” said Switzer after the race today. "I’d like to thank the BAA and everyone involved for their amazing support this entire weekend. I’d also like to send special thanks to the members of our 261 Fearless Boston Marathon team who have helped empower women globally through running.”

On a glorious 75-degree (F) day in Boston, Switzer crossed the finish line in full stride and into the arms of race officials and then enjoyed and emotional hug with her husband, Roger Robinson. She received incredible support from over 1 million fans lining the streets of suburban Boston and then into the city where the race concludes in Copley Square. Many members of the 261 Fearless team that supported her all weekend ran were at her side as she crossed the finishline. The 2017 Boston Marathon was Switzer’s ninth and her official time was 4:44:31.

Fifty years ago, Switzer, now age 70, officially registered for the Boston Marathon, signing the race application with her initials, K.V. Switzer. The race was considered a men’s only event at the time. Mid-stride in the competition, the angry race official accosted her, tried to tear off her official bib numbers and throw her out of the race. Switzer, then even more determined, went on to finish the race, run 39 more marathons, including her historic win at the 1974 New York City marathon championed the cause of women’s running by organizing a global series of more than 400 races in 27 countries and leading the drive to get the women’s marathon into the Olympic Games. Now 58% of the runners in the USA are women and 13,698 of the 30,074 field in today’s Boston Marathon were women.

Today, more than 100 women and seven men were running as advocates of 261 Fearless. One of those runners, Rosy Spraker of Lorton, Virginia, ran her 11th consecutive Boston Marathon but this one meant the most.

“Kathrine not only broke the glass starting line,” said Spraker. “Today she continued to champion a worthy cause for women’s running, looking forward to the next 50 years. With the money our team is raising, we will create non-competitive running clubs, coaches’ education and communication programs in local communities, whether that is here in Massachusetts or in Albania or anywhere else in the world. We’re asking women everywhere to start a club and join our empowering movement.”

“It was a joy to run with this amazing group of women and men from all over the world,” said Switzer. “What was a dramatic incident 50 years ago became instead a defining moment for me and, now for all women runners. The result is nothing less than a global social revolution as we help other women around the world achieve their goals. Because of today’s race and the great fund-raising efforts of everyone involved, 261 Fearless will be able to spread our message far and wide. I sincerely thank them all.” she said.

“We spoke about the past earlier this weekend, and today is the present, but 261 Fearless is about the future. It’s about the next 50 years,” noted Switzer.