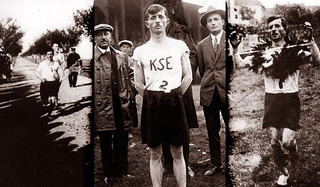 It was 1927 and the Košice Marathon was heading towards its fourth edition. Invitations, with a detailed program, had been prepared and sent out in five languages. Paul Hempel, representing the Berlin club SC Charlottenburg (which today organises the Berlin Marathon) and Pál Király, the Hungarian winner from 1925, were race favourites.

Bad weather ruled on race day with thick fog enveloping runners as they set off. The unexpected winner was the Hungarian Jozsef Galambos but his win was no fluke. Jozsef repeated his victory in 1928, 1932 and 1933. Up to today he remains the most successful male runner in Košice Marathon history.

It was not only the athletes who attracted attention in the 1927 race. Organisers introduced a new innovation that allowed officials to inform the organisers about the race and split times recorded via telephone stations set up along the course by the local military crew.