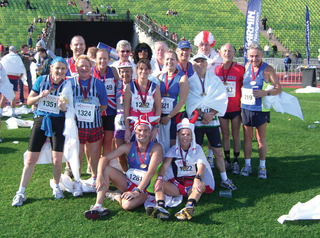 In the last edition of Distance Running there were 56 advertisements for marathons around the world.

There are more runners, more marathons, more exotic destinations, more merchandise and money being made from marathon running than ever before. Travel companies specialize in marathon tours, and new companies promote running in exotic places even without a race in which to participate.

The Marathon is being demystified as it becomes mainstream. Last year there were over 400,000 finishers in the United States alone, up from 295,000 in 2001. Events are also becoming more festive. Briton John Wallace has run over 200 marathons dressed as Superman, raising thousands of pounds for charity by doing so. Osy Waye, also raising money for charity, ran his 100th marathon at the North Pole in a polar bear suit. I have run in the same events with Scooby-Doo and Mickey Mouse, and pounded the streets alongside Roman and Greek soldiers.

Runners compete to get into the Guinness Book of World Records for the fastest times set while juggling, doing football kick-ups, or playing the flute.
Technological advances allow us to log every detail of our run through GPS and heart monitors, and post them on the Internet. Cell phones have become almost commonplace race aids: I overheard, in the last mile of the Comrades Marathon in South Africa, a runner telling his father in Ireland that he was going to finish the race before the 12-hour cut-off. Companies send us photos and video footage from the event. We can purchase a vast array of memorabilia as well as the frames, shelves and cases to go with them.

Modern marathons now compete with each other to offer every potential participant a medal of sufficient quality to tempt them to enter. The medal is a part of any Marathon’s sales pitch. Medals can be huge and impressive (the one from the Quebec Marathon included flashing lights). Many events provide live music along the course as another inducement.

Money aside, I could run marathons in Antarctica, along the Great Wall of China, at the base camp of Mount Everest, in an African safari park, or through the streets of any world capital. And then there are the Expos, offering merchandise to last a lifetime, or at least until the next marathon Expo: if you can commodify it, go for it.

What was once an event for diehards has become an event wide open to all ages and both genders. The Marathon has become transformed into a social movement, with consequences at three inter-related levels;

Individually, there are more runners with an increasing desire for good health, who have money to spend and a desire to travel, and a more outwardly directed social consciousness.
Organizationally, there are hugely diverse and competitive marathon events offered.

Commercially, the commodification of the running experience has generated marathon merchandise and services offered at every possible opportunity.
All these trends are enabled by the Internet, and are contributing to marathon running becoming mainstream everywhere around the world.

Galloway thinks this is only the beginning – that new runners will come into the sport in ever-increasing numbers. His aim is to allow people to run injury-free, enjoy every run, run faster when they want to, and to a very old age. “It is my belief that we were not designed to run very long distances continuously,” he said, “but we were designed to go almost indefinitely by running and walking when we put the walking breaks in early and often.”

Training and running a marathon have become instrumental to improving fitness, health and well-being. The marathon creates the goal and focuses the energy for this to occur. As soon as you have run a few marathons the new multi-faceted social side of the sport works its way into your life. New goals continually present themselves – longer distances perhaps. Older runners often introduce their families to the sport. 1970s marathon star Bill Rogers thinks the growth in participation has been fuelled by the “unique person to person quality of our sport” – friends are examples to each other.

Growing social consciousness is another aspect, with runners increasingly raising money for charity through marathon participation. This has had great impact on volunteer and not-for-profit organizations, which often provide training programs to assist their fundraising runners. In the London Marathon the majority run to raise money for charity.

Some run in memory and in celebration of others. Jose Nebrida has run 58 marathons in 35 states bearing a huge American flag to honour the heroes and victims of 9/11. Runners give their time, energy and sometimes money, to assist others. Disadvantaged children, teens and the homeless in inner-city areas of the United States are offered transformational opportunities through running and training for marathons; prisoners have been provided with training programs; free T-shirts are offered to children in schools as incentives to get them running; and handicapped people are now being encouraged to mobilise themselves for marathons. These people, and those who help train them, are inspirational to us all.

The business world is increasingly involved. Proctor and Gamble, for example, created a training program for its employees, culminating in 306 of them running the Geneva Marathon (10% of the total number of finishers). Not only is it a public relations coup for such companies, it builds corporate morale and team consciousness, and fosters individual values and aspirations that can improve work performance.

For many of the new marathoners, running the distance can also be considered as part of a growing trend to combat superficiality in modern life. Finishing a marathon is a very real, tangible achievement that rewards patience and commitment. You either do it or you don’t. It’s all about you, your mind and body. That’s why it’s so rewarding. Running marathons can counterbalance many things that affect our lives, by setting a tempo giusto, a chosen inner tempo. We do this in running, and we can do it in our everyday lives if we decide to. We take our lives into our running experience, but we can also take the essence of our running experience and apply it to enrich our lives.

Although this social movement is transforming distance running, world records are still being broken, the top runners are better rewarded financially, and there is more media attention, especially at the Olympics. Where else but in marathons can world champions and those running their first race, line up and compete in the same event?

This is an exciting time for distance running. The future is wide open for us. I, for one, read every advertisement in Distance Running, thinking I would love to experience every race, see every place, meet old friends and make new ones. People, place and history; it’s a winning combination.