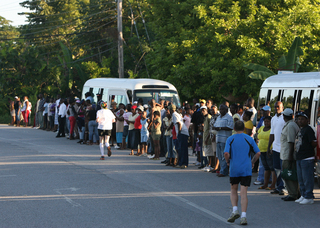 “I love the early start and being able to enjoy the rest of the day,” says Florida-native Terri Rejimbal, sipping piña coladas, eating lobster, wandering the beach and soaking in the sunshine: “It’s a great pre-Christmas vacation, and also a great run.”

In its 9th staging, Jamaica’s premier road race takes place in the island’s west coast haven of Negril. Along the predominantly flat, AIMS-certified course, runners are treated to breathtaking vistas of stunning coastline and lush vegetation along the world-famous 7-mile beach and beyond.

Although the race takes place in the cooler winter month of December, the heat is still testing. A 05.00 start offers some respite. There is in fact a slight chill in the air as the runners take their positions at the start. Burning tiki torches line the first few metres, and offer a warm glow.

Alongside the Rastafarian drummers beating out the signature soundtrack to the race’s start, the atmosphere is almost mystical.

Terri Rejimbal, a Tampa, Florida native, hugs herself to stay warm, hopping lightly from foot to foot. Making her fourth appearance at the Reggae Marathon, she is used to the conditions. Her running resume includes 13 marathons, including one full and two half Reggae Marathons, (she was the female winner of the half marathon in 2008). “This is my year,” she announces, the night before the race, at the world-famous Pasta Party (she was right, as she won in 3:00:57). “I plan to cover as much distance as possible before the sun comes up,” she says. She adds that once the sun is up, everyone suffers, no matter how much training they have done. Competing against the heat adds an extra dimension to the race.

In the early stages, run under the dark sky with the moon still high, the male winner of the 10km race pulls away from the pack. Known locally as the “Usain Bolt” of long distance running, Kemoy Campbell is set to repeat his win from 2008. He leads all the way, to win in 30:25. The 10km race has drawn increasing numbers, this year reaching 358 participants. Added to the 425 runners in the half marathon, and 126 full marathoners, the total was just under 1000. Looking ahead to their 10th anniversary in 2010, organizers expect to celebrate with double the number of participants. “We will focus on international and local marketing, increase our presence at international expos, and keep in touch with this year’s participants, to ensure that we get a great crowd next year.”

As the sun begins to rise, so too do the residents of Long Bay. Children run alongside the road shouting words of encouragement, high-fiving and bumping fists with the runners. “The Reggae Marathon is very special,” says British runner Judy Hanley, who returned this year for her fifth appearance. She reminisces almost tearfully about her 2005 trip, when at 26km she felt as if she were about to hit the wall.

“Suddenly, out of nowhere, two teenage volunteers ran up to me and asked if they could run alongside. We chatted and laughed, they fetched me some Gatorade and stayed with me for half a mile, giving me the extra push to carry on.”

Back on the course, runners pass through small, sleepy towns with names like Bloody Bay, Crocodile Rock, and Orange Bay. Supporters rise and gather on the sides of the roads, cheering on the runners, some spraying water from hoses to offer temporary relief from the heat. Over 300 people volunteer to ensure the marathon runs smoothly, some handing out water and Gatorade at hydration stations set up at each mile.

A few miles behind Rejimbal and Bob Marley’s son Rohan – who was running in his first half marathon – “Mighty Mark” and “The Hurricane” have (as the slogan says) “Come for the race, stay for the fun.” Otherwise known as Mark Bloomfield and Steve Kahn, the duo are celebrating Bloomfield’s 60th birthday, as well as more than a decade of running together. “I love reggae music, I love Bob Marley, and I love running, so what better way to celebrate?”

Bloomfield turns to one of Jamaica’s most frequently heard phrases, “Respect mon” to describe his philosophy on running. “You have to respect the race; you have to recognize that the race is bigger than you.” He should know: as the first ambassador to the United States for the grueling Comrades Ultra Marathon race in South Africa, he has run 26 marathons, including 12 ultras. Bloomfield adds: “You don’t just show up for a marathon” – especially one like the Reggae Marathon where the heat is often a concern even for the local runners. In 2008 Jamaican Rupert Green was leading the marathon, when he collapsed mid-race from an injury. This year he came back to win.

The Reggae Marathon is much more than a race. The event includes the pre-race Pasta Party, the post-run breakfast at Margaritaville, and the victory party that this year featured reggae star Etana, as well the 3-day reggae expo. “These events bring fun and excitement,” says Diane Ellis, the Race’s Marketing Director. “It’s not all about running, but it’s important to fuse the reggae element and showcase Jamaica’s culture.”

Passing the half marathon turnaround, the marathoners continue past Samuels Bay, towards the 26km turnaround point at Green Island. The group has thinned to a smaller contingent – among them, the characters: 82-year-old “Uncle” Roy Thomas; 84-year-old Burt Carlson, and 67-year-old Cecile Bardato.

South African runner Gregory Macket takes the run in his stride. This is Macket’s first time in Jamaica, and after participating in many marathons, including the Comrades, he is not nervous, “It’s just running”, he exclaims the night before the race. With his easy smile and relaxed demeanour, he is the perfect fit for a Caribbean island. It is not surprising then, when Macket explains that his grandfather was born in Jamaica, and he is hoping to reconnect with any relatives.

See the latest news from Reggae Marathon, Half Marathon & 10K