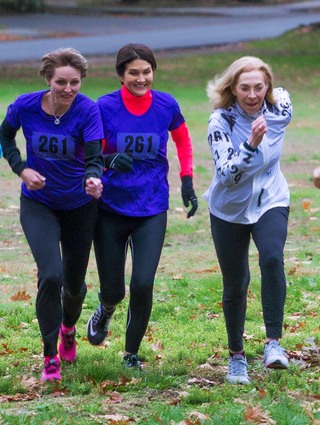 This time, she will be joined by 114 women and 7 men from 20 counties who are representing and raising funds for 261 Fearless, Inc., Switzer’s global non-profit organisation that empowers women around the world through a social running community.

“It is an honour and joy to participate in the 121st Boston Marathon,” said Kathrine Switzer. “That dramatic incident 50 years ago when an angry race official tried to throw me off the course became instead a defining moment for me and women runners throughout the world. The result is nothing less than a social revolution; there are now more women runners in the United States than men.”

Despite the inauspicious beginning, the Boston Athletic Association (BAA) early on understood the seriousness of women’s desire to participate in the Marathon. In 1972, five years after the ‘Switzer Incident’, the BAA welcomed women as official competitors. Switzer placed third in that race, ran Boston eight times, and posted her personal best of 2:51:37 in the 1975 edition.

“We are pleased to welcome Kathrine back to the race which elevated and hastened the movement in women’s sports,” said BAA President Joann Flaminio “and we look forward to greeting her at the finish line on 17 April.”

“[The 71st BAA Boston Marathon] was a race that changed all of us,” said Switzer, now 70. “I’m running to say thanks to a race, a city and all those people who have done so much to give strength and self-esteem to women.”