Many bridges to cross 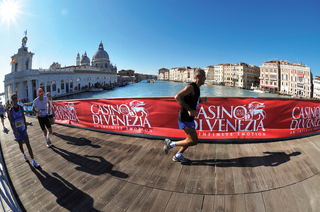 On 24 October 2010 Venicemarathon will organize its 25th Anniversary edition, which will be rich in surprises and celebrations. The organizers hope to welcome you all in celebration of this great anniversary, and in solidarity with some particular charitable causes. For the last few years Venicemarathon has supported causes such as “Run for Water, Run for Life” which raises funds to dig wells to supply drinking water in one of the driest regions in the world - the Karamoja in Uganda.

Venicemarathon is a spectacular and colorful race which begins in Stra, a small village deep in the Italian countryside. This is at the beginning of the “Riviera del Brenta”, the beautiful riverside area where the Venetian nobility built their holiday mansions in the 18th century. The first half of the race develops against the backdrop of a typical rural landscape, following the course of the River Brenta.

The marathon passes through the centre of Marghera and Mestre – these are boroughs of the City of Venice, but located on the mainland. Runners take a 3km tour inside San Giuliano Park – the largest urban green area in Europe – and launch themselves towards Venice over the Liberty Bridge, a 4km-long bridge, flat and straight. The race then passes through the Venice port area and reaches the city centre in the last few kilometers – which are simply unique.

Marathoners run next to the Giudecca Canal to Punta della Dogana. Here the race organizers build, especially for the event, a 180m-long floating bridge across the famous Grand Canal, giving marathoners a 360-degree view of the heart of Venice and its most famous site, St. Mark’s Square. This is a view unavailable to anyone else. In the final 3km there are 13 bridges, all with wooden ramps installed for the race. These are the most popular spots for spectators and give the marathon its slogan “No Bridges, No Fun” (but of course – there are many bridges to cross, and much fun to be had). The course-side cafes are crowded with supporters who let out a communal roar as each runner crests a bridge. The ramps installed on the bridges are not just for the moment, but are part of a project to make Venice more accessible both for people with disabilities and for people with babystrollers.

After passing by Piazza San Marco and the Palazzo Ducale, marathon runners arrive at the finish line in Riva Sette Martiri (seven martyrs). In the finish area athletes find food, drink, massage and changing facilities. Boats deliver runners’ bags, collected at the start, to the finish line. You can then soak your tired legs in the lagoon to help bring them back to life before walking across one last bridge into the magic place called “I Giardini della Biennale”, the site of the Biennale International Art Exhibition, for a unique post-race pasta party.

From there runners can drift back through the city on foot to absorb the history, or they can take a boat directly back to the Tronchetto. From here runners can take the bus back to their hotel or their cars – which they may have left in this area in the early morning before taking the shuttle service to get to the start. Or they can hop on the free bus service to Mestre station, from where they can take a train directly back home (even if their home may be in Rome, Paris or London).

Along the race course spectators applaud all marathoners, from the elite to the amateurs, and they create a warm and appreciative atmosphere. Runners respond – smiling – and are carried along by the feeling. Supporting the same aim, 20 musical groups positioned along the course try to ease the fatigue of all participants. They also entertain all spectators and help them to cheer runners on with the rhythm of their music.

In the three days before the race Venicemarathon organizes several associated events. The most important of these are the Marathon expo, and the Family Run.

The day before the marathon, Venice hosts a 4km Family Run in two locations: one in Mestre inside San Giuliano’s Park and one in Dolo, a small village alongside the marathon course. The family runs give marathoners a chance to share their experience with their children, wives, friends and the students of Venetian schools. These two runs are burgeoning in size year after year, and are no longer just a prelude to the marathon but assert their own presence and attract more than 10,000 participants.

The charity aspect of these events is important, as they aim to raise funds to support the project “Run for Water, Run for Life”. Thanks to support for this project more than 6000 people can now drink clean water in the arid region of Karamoja.

Venicemarathon has a participant cap fixed at 7000 runners due to the physical constrictions over the last part of the race course within Venice proper. In 2009, for the first time, entries had to be closed fully two months before the event. Some pre-planning is therefore necessary if you are interested in taking part. Keep a look out for the bib-numbers still available by checking our web site: www.venicemarathon.it and, when you are ready, proceed with registration on-line or contact the Venicemarathon office. We will be delighted to help you with any kind of information concerning registration, accommodation or any other enquiry you may have.

See the latest news from Venicemarathon