Marathons offer a great way to mix a love of running with the chance to see some of the world’s most interesting, scenic, and historic places. The Amman International Marathon, held under the Patronage of His Majesty King Abdullah II Ibn Al Hussein, offers all of these qualities. 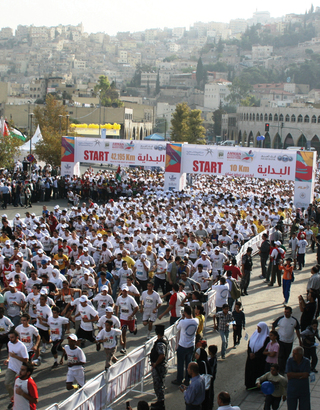 The inaugural race was part of the centenary celebrations of the Amman Municipality, attracting runners from over 50 nations, from Australia to Canada. The addition of a dozen elite marathoners hightened pre-race enthusiasm that saw close to 12,000 Jordanians embrace the occasion by registering for the 4km, 10km or full marathon distance.

Much of the attraction was the gently inclined two-lap course through the very heart of the capital city, which lies on a basin-like floor at the foot of the seven hills.

Starting from the modern municipal buildings runners ran through history and a diversity of cultures. The many souks and bazaars of Quraysh bubbled with excitement, providing a special atmosphere. Support flowed from pavements, balcony cafés, and marathon cheering stations as runners strove towards the magnificent Roman forum and amphitheatre. Even this is relatively modern architecture in what is one of the World’s oldest continually inhabited cities, dating back to Neolithic times, around 8500BC.

A weekend of soaring unseasonal temperatures brought the crowds in but as the mercury climbed to 29C after the race start the pace inevitably slowed. Ethiopian pacemakers Gizaw Bekele and Desalegn Tegegn still creditably clung on to a 2:14 schedule with 34km covered.

As Bekele pulled aside the leading group lost rhythm, allowing 2:12 marathoner, David Kiptum to lead Gezahagn Beyene into the 36km turn point. The race was now about who could still maintain some kind of momentum. Kiptum’s gladiatorial determination gave him a 250m winning margin as he crossed the Al Hashimiah finish line in an almost pedestrian 2:20:48
“The course is much faster than today’s times show, but it was survival in this heat,” said the 41-year old Kenyan.

Moroccan-born Italian Said Boudalia, who has yet to convert the potential of his track times into the marathon, maintained form to secure the final podium position as temperatures settled around 35C – so that only the top seven finishers broke 2:30.

The women’s elite pack held together for 10km before the Ethiopian trio of Tadelech Telila, Alemtsehay Hailu and Etaferahu Getahun led through 15km. From there Telila emerged unchallenged with Kenyan Lilian Chelimo gaining third position when Hailu withdrew shortly before 34km. An energy-sapped Telila crossed the line fully 20 minutes slower than her best time, but almost three minutes clear of Getahun. Chelimo was the only other runner to dip under three hours. Kenyan Joice Kirui provided a measure of the extraordinary conditions as her 72-minute half marathon form could only yield a time of 3:20 for fifth place, less than 100m behind Ethiopian Gashaw Mencho.

Runners continued to finish the races throughout the day. Short, tall, fast and not so fast, the 11000 participants represented a vast diversity of sizes, abilities and public standing, emphatically demonstrating one of road running’s greatest strengths: that it’s a sport for everyone.

While Princess Dina Mired competed the 10km with over 1000 other supporters raising funds for the King Hussein Cancer Foundation, Prince Firas Raad took on and conquered his first marathon distance. Displaying enormous mental tenacity in overcoming the heat and distance the Prince was welcomed down the finishing lane by a guard of honour holding back an enthusiastic crowd. Undeterred by the six scorching hours during which he shared the road with other runners, he found the energy and humility to shake the hands of hundreds of well-wishers as he walked through the finish. As a Board member four hours later, when post-race depletion is normally at its most punishing, Prince Raad was delivering the keynote speech at the Gala Awards Dinner and prize giving.

For many visiting runners the marathon was only a part of the experience; pre- and post-race excursions afforded participants the opportunity to explore the Jordan’s many wonders.

The ancient Roman citadel on Jabel el Qala, the highest of the original seven hills, overlooks the course. An adjacent church dates back to Byzantine times before 400 AD, when the city was called Philadelphia. Several earthquakes and natural disasters destroyed the settlement, which remained little more than a small village until 1887. Then the Hejaz railway was built to link Damascus with Medina and Amman became a major stop for the annual Hajj pilgrimage.

In Jordan today the modern and ancient stand cheek by jowl. It’s a rich mix reflecting the melting pot of cultures that have contributed to Jordanian heritage. From the original seven hills the city now extends over 19 hills with a population estimated at over 2.5 million people.

Going beyond the city, some runners took the short 50km drive north-west to recuperate in the Dead Sea, which at 400m below sea-level is the lowest point on earth. The buoyancy of the mineral-rich water makes swimming impossible, but the legendary healing and health-giving qualities of the water and mud aided post marathon recovery.

Renowned religious sites are all around: Mount Nebo, where Moses died, and the Jordan River, where John baptized Jesus Christ. This is one of Jordan’s most popular tourist locations and a place of immense interest irrespective of personal faith. Nearby Jerash is one of the best preserved Roman cities anywhere, while in the valley of Wadi Al Seer lies the Hellenistic ruin of Qsar al Abd. No trip to Jordan is complete without staring in awe at “rose-red Petra”, recognized as one of the seven Wonders of the World.

Some runners took a jeep drive over the dunes in Wadi Rum where the late afternoon sun highlights the dramatic rock formations, against which many scenes from the classic movie Lawrence of Arabia were shot. To the south, Aqaba is a haven for scuba diving, and Jordan’s access to the Red Sea. To the North and east are the vineyards and fruit farms of the lush Jordan valley.