AIMS in talks with Greek government 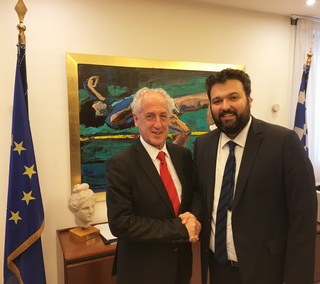 During his recent business visit to AIMS Headquarters in Athens, Greece, the AIMS President, Mr. Paco Borao, had a meeting with the recently appointed new Greek Deputy Minister of Culture and Sports, Mr. Georgios Vasileiadis.

Along with Mr. Kostas Panagopoulos, President of the Hellenic Athletics Federation (SEGAS), Mr. Makis Asimakopoulos, General Manager of “Athens Marathon. The Authentic” and Mr. Theo Livitsanos, AIMS HQ Administrator, the President and Deputy Minister had the chance to discuss future strategic plans between the Greek authorities, SEGAS, the Athens Marathon and AIMS, following the successful recently organised 21st World Congress of AIMS in Athens, the birthplace of our sport, and the close collaboration between these organisations which dates back to 2007.