Catching up with Eliud Kipchoge 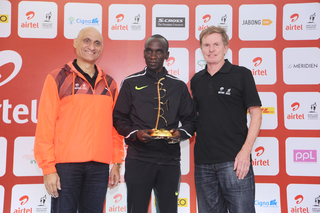 The AIMS Best Marathon Runner 2016 award managed to catch up with winner Eliud Kipchoge, after a six-day chase, 54 degrees of longitude further east.

Kipchoge was unable to attend the official BMR Award ceremony staged in Athens on 11 November (immediately following the 21st World Congress of AIMS) because he was fully focused on final preparations for the Airtel Delhi Half Marathon to be held on 20 November. But within hours of arriving in the Indian capital he attended a pre-race press conference on 17 November at which the award was handed over to him by Race Organiser Vivek Singh and AIMS secretary Hugh Jones.

The corresponding women’s award was made to Jemima Sumgong at the scheduled ceremony in Athens on 11 November.