Association will meet in Estonia in September 2018 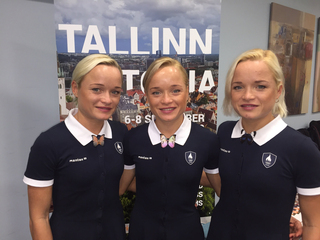 The Luik triplets, the “Trio to Rio”, first triplets to compete in the Olympic women’s marathon

The hosting of the next and 22nd Congress of AIMS was won by the Tallinn Marathon and will be held in the beautiful city of Tallinn in Estonia on the dates of the 6–8th September 2018.

The excellent presentation made by Renna Järvalt, the General Secretary of the Tallinn Marathon had a unique element which was a dance by the triplets Leila, Lily and Liina Luik, who made history this summer in Rio de Janeiro by becoming the first triplets to compete in the Olympic women’s marathon. They referred to themselves as the “Trio to Rio”.

The then 30-year-old triplets only took up the sport six years ago but Lily came a respectable 97th and Leila was 114th. Unfortunately, Liina was unable to complete the tough event on the day, but all three names are now etched in Olympic and world history.

The Congress is co-organised by the ‘Athens Marathon, the Authentic’ and the Hellenic Athletics Federation (SEGAS), Greece’s governing body for athletics.