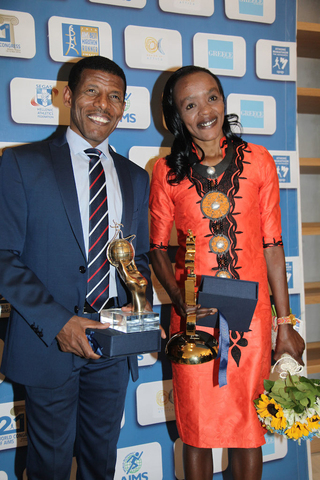 Awards to the Olympic Marathon Champions Eliud Kipchoge and Jemima Sumgong as well as the former world record holder Haile Gebrselassie were the crowning moments of the AIMS gala in Athens, the birth place of the Marathon, on Friday 11 November.

Their outstanding achievements were given global recognition at the fourth annual AIMS Best Marathon Runner’ (BMR) Awards Dinner Reception, which was held as part of the 21st AIMS Congress this year.

Eliud and Jemima were selected by an expert panel on behalf of AIMS Members, made up of 410 of the world’s leading and most prestigious distance races from over 110 countries and territories.

While Kipchoge was unable to attend the ceremony and was represented by his manager Jos Hermens, Sumgong received the Best Marathon Runner of the Year award and Gebrselassie was honoured in Greece with the Lifetime Achievement award by AIMS.

Two more awards were presented on Friday evening: the AIMS Green Award to the Göteborg Varvet Half Marathon and the AIMS Social Award to the Munich Marathon.

“I didn’t expect that I would one day be as successful as this. There are many women athletes in Kenya who are more talented than me,” said Jemima Sumgong, who won the London Marathon in April this year before capturing the Olympic Marathon gold medal in Rio. The 31-year-old reflected on this as she made her acceptance speech for the award. She said that, if selected by the Kenyan Federation for the World Championships next year: “I shall try my level best to win the gold medal in London.”

“It is so special for me to be recognised in this way by AIMS, their members and sponsors. I would like to thank them for awarding me in recognition of my achievements this year. I have been delighted with my form this year and this is a wonderful way to have my efforts recognised by the people at the top of organising my sport at the highest level,” she added.

It was a double Kenyan celebration at the award ceremony since Sumgong’s compatriot Eliud Kipchoge won the male category after the same sequence of wins in London and then the Olympic Marathon. “I am delighted to receive this award for the second year in a row. I really enjoyed receiving the Best Marathon Runner Award last year in Athens and I am very pleased to have been recognised by AIMS and their members from around the world again. It is a great honour to receive this award,” said Eliud Kipchoge.

AIMS President Paco Borao comments: “Jemima and Eliud are clearly the outstanding performers of our sport in 2016. I am delighted that AIMS 410 races from over 110 countries have recognised the achievements of these very impressive athletes in the spiritual home of the Marathon Movement, Athens.”

Haile Gebrselassie was honoured with the Lifetime Achievement Award, a fresh distinction following his recent election as the president of the Ethiopian Athletics Federation. “I am very grateful to receive this honour and that it should be in Greece, the birth place of the Marathon,” said the 43-year-old Ethiopian.