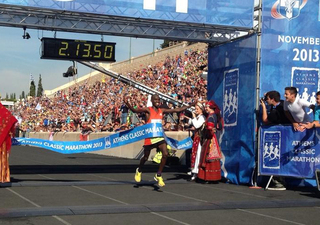 Hillary Yego caused a major surprise three years ago with his victory in the Athens Marathon. The Kenyan ran 2:13:51 on the tough course which was the original 1896 route leading from the town of Marathon to the Panathenaic Stadium in Athens.

Now Yego is returning to the “Athens Marathon. The Authentic” and will be among the favourites for the title next Sunday.

A record 50,000 runners, taking into account those taking part in events held in conjunction, will participate in the 34th edition which will be organised by the Hellenic/Greek Athletics Federation (SEGAS).

Last year SEGAS had to forego having an international elite field because of the country’s bank capital control but the mainly African elite contingent is back this time. The “Athens Marathon. The Authentic” remains a real Greek success story despite difficult times for the country as a whole with entry numbers showing a clear increase of around 15% since last year and 100% during the last 5 years.

Three years ago few considered Hillary Yego to be one of the favourites in Athens. However he proved what he could do on the undulating course and left the bigger names trailing in his wake. The victory in Athens remains the biggest of his career so far. Now 29, he returned in 2014 as the reigning champion but dropped out. In the same race the winner Felix Kandie of Kenya set the course record with 2:10:37, improving by 18 seconds the time of no less than Stefano Baldini when the Italian won the Olympic title in 2004.

Two more Kenyans will be among Hillary Yego’s key rivals on Sunday: Augustine Rono and Luka Rotich. In comparison with Yego, both have faster personal bests of under 2:10 but it remains to be seen how they deal with the demanding course. Rono ran 2:07:23 in Hamburg in 2012 and Rotich ran 2:08:12 in Ottawa in 2013.

Kenya looks like dominating the women’s elite field as well. The 32-year-old Penina Wanjiru made a successful trip to the English south coast town of Brighton in 2015 to win in 2:34:25. Last December she achieved another victory, this time in Spain, winning the Malaga title in 2:37:46. Also coming into contention should be her compatriot Gladys Kwambai. The 33-year-old has a best of 2:36:14 in finishing seventh in Warsaw in 2015.

A runner who might cause a surprise, just as her male counterpart Hillary Yego did three years ago, is Nancy Arusei. The Kenyan won the Remich Half Maraton in Luxembourg with a personal best of 72:31 in September and will be making her debut at the distance in the “Athens Marathon. The Authentic.”