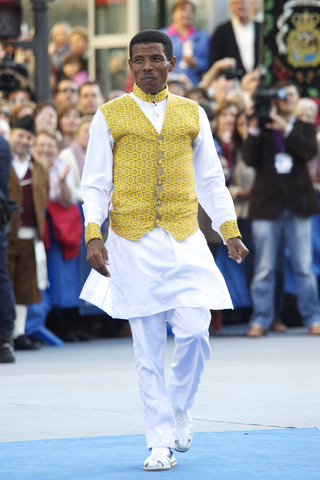 At the Best Marathon Runner Awards to be held in the birth place of the Marathon in Athens, Greece on 11 November 2016 AIMS will present the Lifetime Achievement Award to Haile Gebrselassie.

Haile’s unparalleled career of success across many disciplines of distance running will be recognised on behalf of AIMS’ 410 members from 110 countries and territories, including the BMW Berlin Marathon — a race Haile famously won on four consecutive occasions between 2006 and 2009, setting new World Records in 2007 and 2008.

He has been widely referred to as the greatest distance runner in history. AIMS has previously presented Haile with the AIMS World Athlete of the Year Award for three consecutive years; 2006, 2007 and 2008.

Born in Asella Ethiopia in 1973, Haile first gained international attention when he won the 5000m and 10,000m races at the World Junior Championships in Seoul, South Korea in 1992. He won two Olympic gold medals (both in the 10,000m) and won many marathons around the world. He also has an impressive collection of gold medals from indoor and outdoor World Championships in Athletics. Throughout his career he has set World Records at a variety of distances from two miles to the marathon.

AIMS President Paco Borao comments: “We are honoured to be able to recognise the achievements of Haile Gebrselassie and his unrivalled contribution to the Marathon Movement and world sport. Haile’s success has been an inspiration to so many throughout Africa and around the world and his dedication is an example we can all follow.”

Haile Gebrselassie comments: “I am very happy that AIMS and their members and sponsors have chosen to honour me in this way. I am looking forward to attending the AIMS Best Marathon Runner Awards Dinner to spend a wonderful night with my friends in the marathon community in the home of the Marathon, Athens, Greece.”