A logo has been created to mark the 2500th anniversary of the legend of the Marathon, and was available for use as a supplementary item by race organisations during the year 2010

2500 Years of the Marathon Logo 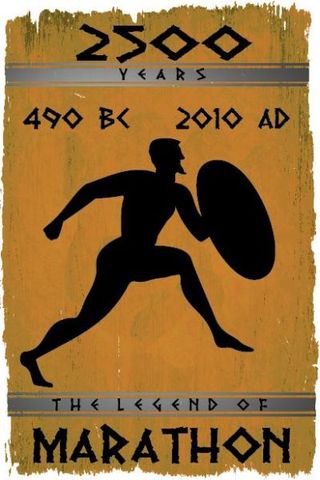 A logo has been created to mark the 2500th anniversary of the legend of the Marathon, and was available for use as a supplementary item by race organisations during the year 2010, highlighting the importance and symbolism for world peace and solidarity that the year 2010 brings.

It would be highly appreciated if you would send a sample of any application on which you will use this logo to AIMS and SEGAS/ ACM (info@athensclassicmarathon.gr), so that we are all aware of what is produced and by whom. This is not an obligation or within the terms of use; it is just a request so that we are able to keep a full record out of this unique anniversary for our sport.

In 490BC the Persian Army had mustered an estimated 150,000 troops to invade Greece, in order to punish Athens for their part in the Ionian Revolt. Led by Generals Datis and Artaphernes, their attack was launched from the Marathon gulf. The Athenian forces consisted of 10,000 citizen-soldiers, including 1,000 soldiers from Plataea, and were lead by General Miltiades. The two forces met near the small village of Marathon to the north of Athens, in September 490BC. The Persian military was considered one of the greatest fighting forces of the era, and the Athenians were fighting against all odds.

Despite being greatly outnumbered the Athenians fought and won the Marathon battle. The casualties were recorded as 192 Athenians, 11 Plataeans and 6,400 Persians. The 192 Athenians were buried in a tomb near the Village of Marathon, at an area today called the Tomb of Marathon. This battle was one of the proudest moments in the history of ancient Greece. The Athenian and Plataeans forces, unassisted, beat the Persians for the first time on land. The victory endowed them with a faith in their destiny which was to endure for three centuries, during which time western culture was born. It is said that a defeat of the Athenians in this battle could easily have changed the tide of history.

Although the writings do not mention his name, the legend says that a brave Athenian called Pheidippides, who had previously run to Sparta and back seeking military aid, ran the 40km (approximately 25 miles) from the battlefield at Marathon to Athens to announce the Greek victory. “Nenikèkamen” (“We are victorious”) or “Niki” (“Victory”) and then collapsed from exhaustion and died. It is quite possible that he may have also taken part in that battle.

Almost 24 centuries later, in 1896, the first modern Olympic Games were held in Athens, Greece. The French historian and linguist Michele Breal proposed re-enacting the legendary run in a running event that would test man’s powers of endurance. He even offered to put up a silver trophy for the winner. Baron Pierre de Coubertin, the inspirer of the Modern Olympic Games, and Dimitris Vikelas, the Greek scholar and first president of the International Olympic Committee (IOC) from 1894 to 1896, embraced the idea with enthusiasm. The legend of the Athenian soldier-runner-messenger was therefore honored by a 40km (24.85 mile) run from the Marathon bridge to the Marble Olympic Stadium of Athens.

This first organized Marathon race took place on 10 April, during the first modern Olympic Games in 1896, and it was especially important to all Greeks. The host nation of the first Modern Olympic Games became ecstatic as Spyridon Louis, a Greek water carrier, won the final, climactic race of the first modern Olympics in 2 hours, 58 minutes and 50 seconds. A 40-kilometre (24.85 mile) race called ‘The Marathon’ was born. Spyridon Louis, as the first Olympic Marathon gold medalist, became a legend, and the course from Marathon to Athens, used today for the annual Athens Classic Marathon, became known as the “authentic”, the “original” Marathon course.

In addition to the logo, a special commemorative medal is available for sale at a recommended price of 10 Euros. The medal comes complete with a special ribbon and 8-page historical brochure, and all items are housed in a specially designed, gilded display box.

Medals can be ordered through the website www.2500marathonanniversary.com, or through participating race organisations.