Kotut and Tefera will run 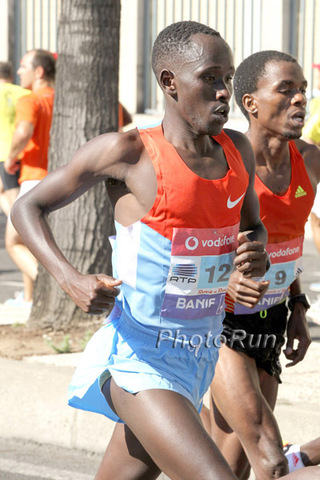 Reigning Paris Marathon Champion Cybrian Kotut is among a group of athletes added to the elite field of the Mainova Frankfurt Marathon on 30th October. Last year’s women’s runner-up Dinknesh Mekash Tefera of Ethiopia has also recently joined the field for the race.

Around 15,000 runners are expected to take part in Germany’s oldest city marathon. In terms of the men’s field, Tadesse Tola of Ethiopia, whose best time is 2:04:49, and Kenya’s Mark Korir have been mainstays on the start list for some time. The Ethiopian is the fastest man in the race while the Kenyan won the Paris Marathon last year with 2:05:49 and will meet his successor and compatriot in Frankfurt: Young Kenyan Cybrian Kotut triumphed in April this year beside the River Seine and improved his best by almost two minutes to 2:07:11. The 24 year-old will be eager to run another personal record on the flat course in Frankfurt.

Unfortunately Kenya’s World Half Marathon champion Peres Jepchirchir decided to withdraw from the women’s race because she felt her training hadn’t gone well enough. However two strong Ethiopian contenders have joined the women’s field: Dinknesh Mekash Tefera and Sutume Asefa Kebede. Tefera missed victory last year in Frankfurt by a hair’s breadth in a thrilling finish, setting a personal best of 2:23:12 behind her compatriot Gulume Tollesa. Sutume Asefa Kebede has great potential as shown by her win in the 2015 Berlin 25km, setting an Ethiopian record of 1:21:55, the fifth fastest ever for the distance. Sutume’s current best for the marathon is 2:24:00 when the 22-year-old finished fourth in Dubai this January. Mamitu Daska was already known as a starter. The Ethiopian is the fastest runner on the women’s start list with a personal best of 2:21:59.

More Information and online entry is available at: www.frankfurt-marathon.com