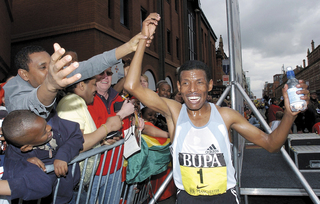 MANCHESTER, ENGLAND - MAY 22: Haile Gebrselassie of Ethiopia celebrates his win with fans during the Bupa Great Manchester Run on May 22, 2005 in Manchester, England. (Photo by Matthew Lewis/Getty Images)
Photo: Matthew Lewis
© 2005 Getty Images

It was done by starting a special 25km “race” prior to the start of the usual 20km race. A small group of pacemakers plus Gebrselassie covered the additional 5km over a two-lap course before joining the 20km course.

A narrow passageway allowed Gebrselassie to pass by the mass of runners awaiting the start of the 20km race. As he passed the start line for the 20km race, that race was started. The practical effect of this piece of stage management was that at the 5km mark in the 25km “race”, Gebrselassie acquired a new set of pacemakers.

Setting up a shorter race to start at just the same time as the leading runners of a longer race pass by means that there are two separate races with different starts and start times going on at the same time and on the same course.

No sport should sanction that. The two events inevitably interfere with each other and significantly affect each other’s results. IAAF rules clearly prohibit runners from receiving pacing or assistance from a runner or runners not participating in the same race. Yet this is the situation that was purposefully engineered by the organisers of the Alphen 20/25km.

Some might argue that this is a minor point, insufficient to invalidate the mark as a record. I would argue that it is a very important issue and it also sets a very dangerous precedent.

This strategy, if accepted, could be extended to an attempt on the world marathon record. As the lead pack in the marathon passed the half marathon point, a half marathon “race” using the last half of the marathon course could be started, thereby providing fresh pacemakers for the second half of a marathon.

Setting up bogus “races” like this entirely changes the basis upon which pacemakers operate. A pacemaker is normally entered in the race and starts at the start. He or she is also a potential competitor, regardless of any proclamation that his or her role is limited simply to pacemaking. Such pacemakers have gone on to win the competition that they were supposed to merely pace. The most recent instance of this occurred only a month before, in the Standard Chartered Dubai Marathon.

Under this new arrangement a pacemaker cannot win the race, since they did not start at the start line for the competition. In the Alphen example Salim Kipsang (KEN), who won the 20km race, was not a competitor in the 25km since he did not start at the start line of the 25km race and did not run the full 25km course. Yet he clearly paced Gebrselassie for part of the 25km race. How far he paced him is irrelevant. Any illegal assistance invalidates a potential record performance.

In an extreme case, a runner could set a new world record without ever hitting the front at any point. After first drafting behind the original pacemakers, the runner could then draft behind the leaders of the shorter race, content in the knowledge that even if they cross the common finish line first they cannot beat him/her.

Approval of the Alphen 25km mark as a world record would set a very damaging precedent. Imagine the same sort of thing happening on the track. A 5000m race starts in which a world record attempt is to be made. After five laps of that race a separate 3000m race starts, just as the lead runners in the 5000m pass by. The leaders in the 5000m race would then be free to draft behind the 3000m runners who could tow them to a new 5000m world record. If the 3000m runners were not strong enough to last the pace, then the same thing could be set up with 1500m remaining. Such farcical proceedings would be greeted with immediate uproar.