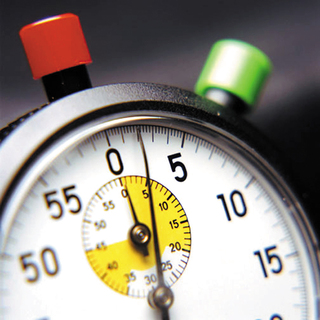 Big-city mega-races are really two separate events. The elite field provides the competitive sports story while the rest of the field generates publicity as a celebration of fitness camaraderie and charitable fundraising.

Every race wants to set records, to show that it is truly a major event. Because so much prestige and money are associated with a record every effort is made to assure credibility through reliable measurement and timing procedures.

For mass runners timing standards may be more relaxed. They want to see their finish time in the printed results, and are usually aware of roughly what it is. Typical finish line photos show runners punching their watches as they cross the line, although they accept a small difference in the officially recorded time. Aside from individual runners’ desires to see their own finish times there is little interest in anything but who stopped the clock first.

Timing winners has never been much of a problem, but it is not possible to hand-time every finisher to the same level of accuracy as the winner. When race fields grew to many thousands the old pull-tag and chute systems became cumbersome and electronic or “chip” timing systems came into existence. ChampionChip is the most widely used electronic system, although there are others which employ similar methods. They have become very effective in producing fast and accurate results. Timing road records is very different, having evolved from methods used on the track.

At present, on the road and on the track, the leading times are taken when the runner’s torso breaks the vertical plane of the finish line. Three vetted timers independently stop their watches. They compare the times, which usually agree closely. If one is markedly different it is discarded as erroneous. Either way, the greatest time is taken as official and rounded up to the nearest whole second.

A fundamental difference between the old and new systems is the precise location of the timing points. In conventional timing the leading edge of the torso and the finish line are clearly-defined points. In electronic timing the torso is substituted by an electronic chip carried by the runner and usually fastened to one shoe. The system is set up to capture the time that the runner’s chip-equipped foot crosses the finish timing mat. The timing impulse will occur somewhere on the surface of the mat, close to but not exactly coincident with the finish line.

Major races have been using electronic timing for over a decade, while the leading times have been captured separately by teams of human timers. These hand timings have been used as the official times when records have been set. I have never seen a comparison between the two sets of times. This valuable information may have been preserved, but I am not aware that it has been published.

In the early days of electronic timing malfunctions sometimes occurred. Indeed, in a field of many thousands it is almost certain that a few times will be missed, just as for hand timing. Perfection eludes us, but reasons for electronic mix-ups include:

1 The runner forgets to wear their chip

2 The chip is lost along the route

4 Roommates get their chips mixed up

5 A runner cannot compete, and gives the chip to another runner

6 The chip impulse is missed by the receiving system. This does not happen often, but it does happen

7 Cheaters bring many inventive approaches too numerous to mention

8 The timing system itself suffers a partial or complete breakdown.

Finish times should spring from the computer system to the public as fast as runners cross the line. This can happen further down the field but rarely for the top finishers. There is always a short delay while human timing system operators scrutinize the leading times to be sure that they make sense. Occasionally backup times are inserted in place of missing electronic times. The substitution is done by the timing system operators unobserved by the public. The results become official as published, and as far as most are concerned, the electronic wizardry did its job.
Given reasonable chances that things could go wrong, it would be negligent to rely only on electronic timing. The potential for embarrassment demands reliable backup. Some systems have built-in electronic backup which supposedly compensates for errors, but the most common form, certainly for the lead finishers, is human timers.

Human timing as a backup has obvious advantages. Most people find no difficulty in understanding a human punching a watch. When the processing flows through a computer, with results sometimes adjusted by the timing supervisor the outcome appears as if by black magic.

Anybody can understand three humans punching their watches. The winner cannot be misidentified. He or she is seen by all. And the time that results is the one that meets the present record standard. Given the huge budgets of most big races it does not seem unreasonable to ask them to provide three people to do this relatively uncomplicated job of stopping the clock.

Timing technology is changing, and for the better. When it can be demonstrated that electronic times are as accurate and reliable as three stopped watches perhaps they can be used for records. That time has not yet come.