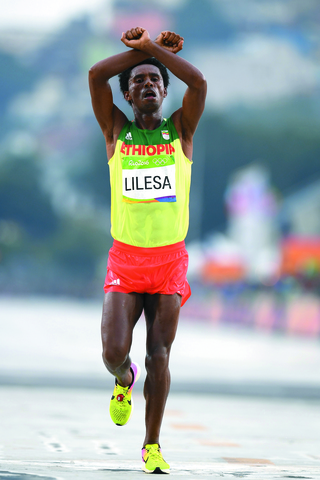 When Feyisa Lilesa approached the finish line in the men’s Olympic Marathon in Rio de Janeiro he raised his arms, as anyone might expect, but then crossed them at the wrists.

He repeated this awkward gesture several times as he covered the final hundred metres. Few spectators could have known what to make of it.

It wasn’t the jubilation of winning – Lilesa finished second, in silver medal position – but it didn’t even look remotely joyous. His facial expression could only be described as a grimace.

It was a sign of support for his Oromo people. Oromia is Ethiopia’s most productive agricultural region and responsible for 60% of GDP. Yet the Government, dominated by the minority Tigrinya ethnic group, is set upon forcibly relocating the Oromo so that their lands, immediately surrounding the capital city Addis Ababa, can be released for industrial and commercial development.

The threat of government expropriation was met by fierce demonstrations in November 2015 which lasted for months. International human rights organisations estimated 500 deaths resulted and 20,000 people were imprisoned. The Oromo were using the same gesture in their protests as Lilesa made at the finish line in Rio – and during the medal ceremony on the podium.

The Ethiopian Athletics Federation is a semi-governmental organisation. National athletics federations the world over have habitually treated “their” athletes as pawns in a game for what they define as the greater good of the nation, even if it works against the athletes’ own interests.

The Ethiopian government adopts an imperious attitude towards Oromia and the Federation naturally takes Oromo (and other) runners for granted. But with rising discontent at home and increasingly greater exposure overseas it could have been predicted that one runner might sooner or later step out of line and make a protest on behalf of their community.

Feyisa Lilesa became that person: the youngest man to go under 2:06 for a marathon when he ran 2:05:23 at the 2010 Rotterdam Marathon, aged 20. His personal best of 2:04:45 (in the Dubai Marathon 2013) ranks him as the 18th fastest marathon runner ever (at that time, 11th). His performance in Rio was something of a return to his early form. He must have known what he had to lose.

At risk to his life, and at the sacrifice of his career and family, Lilesa made his gesture in order to bring the grievances of the Oromo to worldwide attention. While it was without the immediate recognition and impact of the Black Power salute of 1968 the story rippled through social media and fed back to the mainstream.

He professed himself fearful for his personal safety should he return to Ethiopia and sceptical of assurances by the Government to the contrary. In a post-race press conference he said he would seek refuge in another country – most likely the United States. But his family, including his wife and two children, remain in Ethiopia.