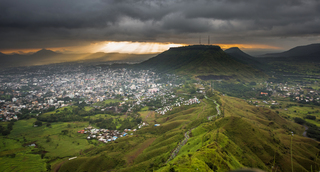 Satara is a quaint little city nestling in the rugged and mountainous region of the Western Ghats of Maharashtra Province in India. It is now home to one of the most popular events on the country’s rapidly growing running calendar. A historically and culturally significant region, Satara is well known as the erstwhile capital of the Maratha Kingdom founded by the legendary Warrior King Shrimant Chhatrapati ShivajiRaje Bhosale.

Started in 2012 by a small group of local runners this record-breaking event has come a very long way in just over four years. The challenging nature of this beautiful course through the clouds and past waterfalls has earned it the title of the Ultra Half Marathon.

Founder, President and Race Director Dr Sandeep Kate says: “We are an entirely community and volunteer based organisation. When we held the first edition in 2012 the challenges seemed insurmountable. We are working professionals who wanted to put on a running event to promote an active lifestyle and to introduce others to the wonderful world of distance running.

“Being surrounded by hills we had no choice but to include a lot of them while planning the course. We weren’t sure how the runners would respond to such grueling terrain.

“There was hardly a running culture in this city back then but we got support in the form of participation from the nearby big cities like Mumbai and Pune where running was already becoming popular. Runners fell in love with our tough yet beautiful hilly course. The difficulty of the course turned out to be an asset — a blessing in disguise.”

Participation figures have been almost doubling each year. Last year, the event created a new benchmark in the Guinness World Records title for “the most people in a mountain run — single mountain” with 2618 finishers. The 5th edition which took place on 18 September 2016 saw a record number of 4100 finishers in the main event — the Half marathon, thereby surpassing the previous figure by a handsome margin (official confirmation awaited).

Although most participants in the first couple of years came from outside the area the last two editions have seen an exponential increase in the numbers of local participants as well. The race has already achieved a level on par with some of the much older and professionally organised international running events.

What was started by a handful of local runners has now turned into something of a mass movement, motivating people to get out and participate — especially women who were originally quite apprehensive about running out on the road in public.

The UNESCO World Heritage site KAAS — the plateau of flowers (23km from Satara) is just under an hour from the heart of the city. It is a beautiful drive through lush green hills and valleys. The out-and-back half marathon course follows this route. During September and October this famous plateau draws thousands of visitors from all over the country and the world. Visiting runners usually combine their run with a more leisurely visit to the plateau of flowers later on in the day.

The event has come as a major shot in the arm for the local economy. Thousands of runners and their families come from outside and between them spend millions of Rupees during their stay. Many of the hotels in and around the city are now booked by runners up to a year in advance. The organisers have had to initiate home-stay options in the local community in order to accommodate the growing number of runners. This strengthens the involvement of the local population with the event. Many local runners now regularly end up hosting other runners in their own homes so that the event has become a catalyst for the development of a runners’ brotherhood in the region.

Apart from the half marathon there is a fun run supporting a charitable and socially relevant cause. This year the theme was “Beti Koi Bojh Nahi” — that the girl child is an asset not a liability. The aim was to raise awareness about the need to support and celebrate the girl child. Over 1300 runners came out with their daughters and ran the 3.5 km Fun Run to support the cause.

A major attraction is the strong crowd support with groups of performers beating drums accompanied by the inspiring tunes of local musical instruments such as the traditional War horn – Tutaari and the Halgi. Runners can’t help but dance their way up and down the hills.

At the finish line runners are rewarded with a beautifully crafted and theme-based medal depicting a sword and shield. There are three different medals for cutoff times of below 2.00 (Hill Champion), 2 to 2.30 (Hill Conqueror) and above 2.30 hours (Hill Challenger).

The event has been voted one of the World’s Best 50 Half marathons for the last two years in Runners World (UK) magazine.

Foreign runners come from North America, East and South Africa, Asia, Europe, the Middle East and Australia. The course records, both set in 2015, stand at 1:07:47 and 1:19:56 to Ethiopians Biruk Jifar and Fasika Metaferiya respectively.

See the latest news from Satara Hill Half Marathon