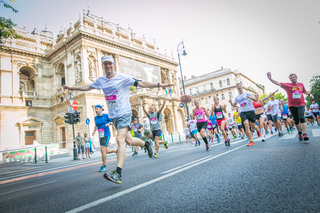 Building on a rich history the Wizz Air Budapest Half marathon meanders through Unesco world heritage sites and tours the city’s art nouveau and neoclassical sites, providing a festival for nearly 15,000 runners.

“You get two for the price of one: a party feeling and superb race organisation,” said James Taylor, a three-time finisher. “I keep coming back because I want to re-live this celebration of running.”

Held since 1984 the race has grown to become Central Europe’s biggest half marathon attracting over 2200 international runners from 77 countries. Next year’s race, scheduled for 10 September 2017, looks as if it will be another record-setting event as ever more runners discover the race and take advantage of budget airfares to Hungary.

“I moved to Budapest 35 years ago and I still love it,” race director Árpád Kocsis says. “I have run 20,000km in this city and I will never get bored of it. But I’m never able to run the event and I’m jealous of those who get the chance to run through all the beautiful historic sites.”

Starting in the City Park (Városliget), an oasis of green in the middle of the metropolis, the tour de force starts from the gun. Runners cross Heroes’ Square, a monument to Hungary’s founding fathers and most influential kings, before streaming down Andrássy Boulevard, along which lies some of the city’s most iconic architecture.

“My favorite part of the course is running across the Chain Bridge,” says Managing Director István Máth. “If you look up you get a unique view of the Buda side framed by the chains and structure of the bridge”.

The race also offers splendid views of the Opera House and the banks of the Danube with such magnificent sites as Buda Castle, the neo-Gothic domed Parliament building and Fisherman’s Bastion.

Organised by the same group for over 30 years, the race is also a tribute to professionalism. Runners get what they are promised and what they need — from an accurately measured course to well stocked refreshment tables, pace runners, real time results, continuous medical supervision, and a rich post-race goodie bag. A pre-race warm-up, where runners can meet, also helps athletes get in the mood and the post-race joint-stretching always converts into a picnic. A quality 3-D finishers’ medal gives runners a lasting memento of their race.

To cope with the growing popularity of the event athletes start in four separate waves which limits crowding and gives everyone their space on the course. Sixteen musical points dotting the route also lift the mood. And for those who find a half marathon a bit too long, two- and three-person relays or the 2.9K fun run are also available.

British runners are usually the biggest group of foreign runners followed by Slovakia and Germany. But athletes from faraway places like Brazil and the US are also regulars, giving the event a distinct international taste. Indeed, Japan’s Seiji Hamada holds the men’s course record with 1:02:44 while Romania’s Mihaela Botezan has the women’s best of 1:10:17 — proof that it’s not just a beautiful course, but also fast.

Catering to both the fast and the slow, athletes enjoy a 2:30 time limit, a fully traffic-free course and plenty of cheering from the crowds.

“I love hanging out after the finish because the race slowly transforms into a family picnic,” says James Taylor. “People just don’t leave but stay and enjoy the early autumn sun.”

Organisers have tried hard to increase the number of women running and largely succeeded. While only 12% of the finishers were women in 1996, that figure has risen to 38% this year and is in an upward trend.

Like elsewhere in Europe running has become a national pastime in Hungary with facilities mushrooming across the country. Athletes arriving early should visit Margaret Island (Margitsziget) on the Danube, where a 5km running track with water fountains, toilets and nighttime lighting provide an ideal place to fine tune preparations. It is also a place to observe the city’s thriving running culture, meet new friends or take the family for a picnic. The island offers splendid views of the city.

Runners should plan their time after the race to include a visit one of the city’s thermal baths, like the neo-baroque Széchenyi, just a striil from the half marathon finish, or Rudas, a fully renovated 16th-century Turkish bath.

Ruin pubs are also a great place to relax. Built on empty lots or taking over abandoned buildings, these pubs take their customers back in time and away from the bustle of a busy city. Szimpla is the best known ruin pub but dozens of them open and close every year so it’s worth a quick internet search. The area known as Gozsdu Udvar in the Jewish quarter is also one of the busiest nightlife spots with all places catering to international customers. Autumn is the season for wine festivals, which showcase the best of the country’s produce.

See the latest news from Wizz Air Budapest Half Marathon