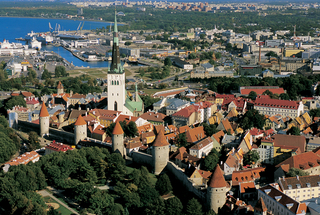 Approaching the starting area of the SEB Tallinn marathon the city greets you with a misty autumn morning. It’s 13C and you can barely feel the sun behind the fog and clouds.

At 07.45 there are only a few runners gathering for the 09.00 Marathon start. Everything changes in just 15 minutes – you can see runners emerging from the adjoining streets in small and large groups.

SEB Tallinn marathon is the epitome of a hassle-free race – you get everything done easily within 30–45 minutes of the start, which is within walking distance of the biggest hotels. The start and finish are at the same place in the very heart of the city and public transport is free for participants. There are plenty of toilets, the bag drop is 35m from the starting line and the changing area is next to the bag drop.

The Marathon is always on the second weekend of September and has quickly become one of the biggest in the Baltic-Nordic region. There are almost 20.000 participants but since the races have been spread over a three-day weekend, it doesn’t ever really get that crowded. 2000 runners take part in the marathon, 3500 in the half marathon, 10.000 in the 10km and 2500 in the 5km. You can even “double up” by running the 5km on Friday, the 10km on Saturday and the 42km on Sunday. Every year there are some people who do this.

The Marathon itself has become very international with participants from more than 50 countries: more than a third come from outside Estonia.

The Marathon route consists of two laps. It is very flat and it takes you around the medieval centre of the city towards the beaches out to the east of town. Here you catch a glimpse of quiet suburbs while later on you can enjoy a view of the eclectic city skyline — medieval church-towers mixed with modern high-rise buildings.

The 5km takes you to the old town, where narrow cobblestone streets 700 years old offer you a different perspective of Tallinn. If you choose to run (or walk) the 10km then you’ll get a view of the city’s more recent past: you pass a unique Seaplane Harbour, an old Prison, an historical wooden townhouse district and even run through the old Power Plant that is known locally as the “Pot”.

Water and a sports drink are offered every 2.5km, you also get bananas, raisins, bread, salt, etc. Sports gels are available at 10km and 30km.
After crossing the finish line, you get a hefty medal and a foil-blanket to keep you warm until you collect your gear. While taking water and a bottle of sports drink I stumble and look for a place to sit. Medical personnel quickly notice me and ask whether I need any assistance. No, no — I’m just tired. I’ll soon get to the fountain where a fellow runner cools his legs. He’s from Latvia and chose Tallinn for his first marathon. He explains the reasons: it’s well organized — everything runs smoothly and you don’t get mixed up with half marathon runners on the route; and because of the food and service that marathon runners get after finishing.

Marathon runners are offered real food after the race, not just an apple or an energy bar. You’ll get pasta, wraps, pastries, soup, yoghurt, bananas, different drinks and beer. The only place you’ll see a queue is at a beer keg… Some runners stay at the food tent for hours, talking, eating, drinking and having a massage. The words “sports bar” has a completely different meaning here, all free of charge for marathon runners.

After exiting the marathon area, I walk 50m to the nearest bus stop and within 15 minutes I’m back home. Tallinn is a small and convenient city — the airport is just 15 minutes from the city centre and the port is right next to the old town. If you come by ferry, from Helsinki or Stockholm, then you can easily walk to the ferry terminal after finishing the race.

Estonia is a small country with a population of only 1.3 million people but with a booming marathon running culture. The number of marathon runners has grown almost tenfold during the last 10 years. The first marathon held in Estonia was back in 1913. While the most famous marathon runners in Estonia are the triplets Leila, Liina and Lily Luik — the first triplets ever to participate in an Olympic Marathon, in Rio, there have been others before them. Jüri Lossmann won silver at the 1920 Olympics in Antwerp while Pavel Loskutov won took second in the European Championships in 2002. In Rio a total of five runners competed in the Olympic Marathon — a good achievement for such a small country.

SEB Tallinn marathon is the biggest marathon in the Baltic States, although there are almost 50 smaller marathons as well. For example, there is an indoor marathon held in January where runners complete 169 laps of a 250m track. There is also a night marathon that starts just one hour before midnight (105.5 laps of a 400m track). The longest-running marathon dates from 1956 and the oldest marathon runner in Estonia is currently 83-year old Benno Viirandi.

Since the country is small and marathon running as a mass participation sport started booming just a few years ago every single marathon result and runner is accounted for. As of September 2016 the number of Estonians who have run a marathon in the last 103 years has been just 6903. Every single Estonian marathon runner can look up his/her position at marathon100.com, the leading local running website.

See the latest news from Tallinna Maraton, Half & 10k