By far my slowest and most challenging marathon but also the most beautiful and extraordinary. I am exhausted, happy, thirsty, and I want to do it all over again

Run back in time 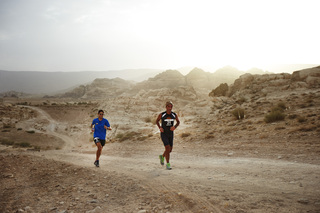 From my vantage point on the mountain ridge I see a never-ending landscape of soft sandstone mountains like skulls popping up from the desert sand. Further in the distance Israel is visible through the heat haze of the Wadi Araba desert. Only 5km to the finish line: my legs are longing to rest but I do not want my journey through this incredible landscape to end.

A few hours earlier I found myself at the starting line inside the ancient Nabatean city of Petra — one of the New Seven Wonders of the World. With its impressive tombs and façades carved out of the surrounding mountains, this is definitely the most impressive backdrop for any starting line that I have ever crossed. As we begin I almost trip on the uneven sand and gravel road. My eyes are fixed on the amazing surroundings. A cave settlement to my left, more than 50m high facades to my right, the amphitheatre carved right into the mountain, and the colonnaded street are just some of the attractions diverting my attention from my footing.

“The hardest thing about this race”, as our race director said during the previous day’s race briefing, “is that you’ll never find a steady pace. It is always up or down. The surfaces are always changing. And, to prepare you, we’ve included a little hill after the first 1500m”.

“A little hill?” I think, as I exit Petra and see a 2km-long climb — with an average incline of 10% — into the Bedouin village of Umm Sayhoun.

After 6km the route wanders into the desert. Although this part is flatter it does not allow for faster running. Soft sand is replaced by gravel, which is replaced by loose rock, only to be replaced again with soft sand. Only 10km into the race it is clear that this is going to be the hardest marathon I have ever done — but I am already loving every single step of it. The views in the desert are breathtaking: the rising sun illuminates a kaleidoscope of red, brown and golden colours over the mountains with the ever-changing shadow giving the rock surface all sorts of fabulous shapes. At times I wonder whether I am running in the Jordanian desert or on Mars.

The course is well-marked so I am never in doubt about the route. I can instead enjoy the scenery and the sight of the occasional Bedouin tent and passing herds of goats. I decided not to run with my camelbak — a wise decision as it turns out: we pass 14 water stations along the course, all of which are well-supplied to keep runners hydrated in the desert heat. They are manned by super-friendly staff who ask how I am doing and cheer me on.

The Petra Desert Marathon has an out-and-back stretch of just about 8.5km. Coming to the intersection where the marathon route splits off from the half marathon I am feeling a bit anxious as I usually find backtracking on myself to be psychologically demanding. Any mental fatigue, however, dissolves immediately as I take in the dramatically changing landscape. Now running on asphalt, we pass a reservoir surrounded by lush green fields, where a couple of camels are grazing and look at me with a lazy expression. I cannot decide if they are expressions of curiosity or pity for the foolishness of running through these hills…

I meet the leading runner as he heads back from the turn-around. “Is it far to the turn?” I shout. “A bit,” he replies, “but it’s awesome”. Turning the next corner I see what he means: the mountains change from the rounded, golden sandstone to darker, more dramatic and pointy rock — it almost feels as if I am running in to another world.

Finally, I see something shimmering like a mirage in the distance – the blue umbrella signaling a water station and in this case the turnaround point. I would have been excited had it not been for the fact that the umbrella is at the very bottom of the hill I am standing upon. Three hairpin bends later I receive the wristband as proof that I have been all the way out (and down) to the turn. Running back I get to high-five the other runners coming out to pick up their wristband and I also see new scenery as everything looks completely different from the opposite direction. A carful of Jordanians passes me as they shout an encouraging “Yallah, yallah” (Let’s go!).

Completing the out-and-back stretch and passing 31km with only a quarter of the course left, I feel fine. Until I look up… way up. There is a little blue umbrella on the mountainside — the next water station — and between me and that refreshment lies a twisting black paved road that winds its way up the mountain: it looks so hard. After running just a few steps I realize that my finishing time is irrelevant and all that matters is to complete this race within the time limit of 7 hours. I am walking, stopping to catch my breath, walking again. A continuous 3km ascent — climbing 300m and with no shade from the sun’s blazing heat — takes its toll. Then I look back down and realise I am not the only one. Runners appear as distant dots of colour slowly making their way up towards the water station.

I was beginning to wonder why on Earth I signed up for this race but then I reached the water station and knew why: looking down I can see the entire desert through which I have struggled over the last few hours. The next 6km on the mountain ridge rewards all the effort with views of an unbelievably beautiful landscape.

As I run the final few kilometers downhill to the finish I can’t help thinking that this marathon has gone all too fast, despite my watch showing 4.5 hours have elapsed. This is by far my slowest and most challenging marathon but also the most beautiful and extraordinary. I hear the music and see the Bedouin tent marking the finish area. The speaker calls out my name in congratulations as I cross the finish line and receive my medal. I am exhausted, happy, thirsty, and I want to do it all over again.