Running this race is like seeing all of Norway in miniature

A dip in the bay 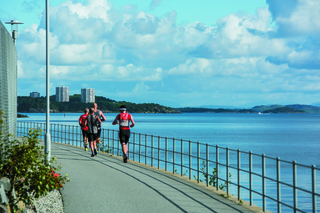 The Stavanger Marathon starts by the church steps. The grand medieval structure from 1125 is the city's oldest building. Scattered around it are a number of the small white wooden houses characteristic of the coastal town, one of Norway’s most popular cruise ports.

Big ships are moored right in the centre of town. People come to walk in the small cozy streets and many combine their visit to Stavanger with a trip to the nearby Pulpit Rock — Norway’s most visited mountain view.

This year was the 15th anniversary race of the Stavanger Marathon. For any tourist wanting to get to know a city a marathon is often the perfect way to look around. Running the Stavanger course is like having a tour of the whole of Norway in miniature. For the half-marathon you run around a lake and along two fjords. The Norwegian mountains can be seen from a distance. The fittest who choose to take on the whole 42km get to see this beautiful scenery twice.

I have run the Stavanger Marathon several times before. It is the variation which make you keep coming back. Narrow gravel roads lead into stretches where the landscape opens up and your eyes breathe in the mountains on the horizon. This year I ran as a private pacemaker for my brother-in-law.

Knut does not look like a typical runner. But the big man with the tousled hair will try running any kind of race. He prefers the marathon but his goal today is to run inside 1:40 for the half. It’s a dream he’s had for 20 years — and he’s been close. A few years ago he managed 1:42. But even though Knut trains and trains something always seems to happen along the way: he gets lost or hits the wall. Today we aimed to run 1:45.

The 1:40 pacemaker’s flag was waving a little way ahead of us in the starting pen. Just behind us stood Martin, whom I know from the organising club, flying the 1:50 flag. “We have to take it easy in the beginning,” warned Knut, and I agreed. The race began and within 200m we let Martin’s flag pass. “He’s running too fast,” said Knut. “He’s going to completely mess up the schedule.”

I looked at my watch as we ran through the first kilometer in 5:25. Clearly Martin was on pace: it was us who were running too slow. If we were going to make our time we had to run each kilometre in five minutes flat. “I think we have to speed up,” I said. “Must we?” breathed Knut.
He stayed on my heels as we started to tack our way through the runners. I felt my pulse rise, but we had no choice. The route took us along the beautiful walking trails around Mosvannet. The lake is one of Stavanger’s most popular hiking areas. I waved to Martin as we passed. We ran through 5km in 25 minutes. “We are on the right pace,” I said. “We just need to keep it going until the end.”

The next few kilometers went like a dream. Me in front and Knut just behind. Conditions were perfect: 15C, sunny, thin cloud cover and a gentle breeze. We slowed down a touch as we climbed the small hills and made up the pace when we ran down again. Soon we smelt and felt the sea and salt air. We passed the “Swords in Rock”, the monument commemorating Harald Hårfagre, the Viking king who united Norway. A thousand years ago a great naval battle raged in this very fjord. But we had no time to contemplate — we had to move on.

The trail left the waterfront. As we approached the hill to Hinna something happened to Knut: “We must save a bit of gunpowder,” he muttered. The time was slipping. The last kilometre was a 5:15. Up the hill we went even slower.

“We need to pick it up on the downhill,” I cried. Knut didn’t respond. The trail was headed for a new inlet. The first runner from the full marathon passed, already on his second lap. Just behind him came Taranger, Knut’s mate: “Good one, Bjørn Tore!” cried Knut.

At 16km it was clear that we wouldn’t make it. When I turned to look for Knut I spotted the yellow cloth with the figure 1:50 just behind. Martin smiled and laughed. His bag was filled with sweets which he handed out to everyone around him: “Want a sweet?” he shouted. Beside him ran a man with huge muscles. His running shirt sported his club logo. “Sandnes Beer and Stamina,” it said. The muscle man had music in his ears and struggled to hear himself talking. “What a wonderful day!” he shouted. “Last night I warmed up for the race with four beers and lasagna, and I’m on for a new personal best today.”

Along the marina, just 1500m from the finish, Martin’s flag disappeared along with the muscle man: Knut and I were alone again. Our finishing time was already forgotten as we began the walk home. We crossed the line and took the drinks handed to us. As Knut sipped he smiled.
“Since it’s such nice weather today let’s take a dip in the bay.”