A runner experiences emotional high in the extraordinary Tangamanga Park 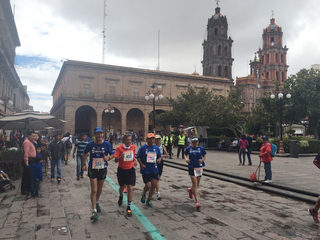 The day had finally arrived: the date that I’d been waiting for more than six months; the one that I had chosen to complete my 30th and last marathon at 70 years of age in one of the most beautiful cities of the world, San Luis Potosi.

San Luis lies halfway between Mexico City and the US border and in the middle of the triangle formed by Mexico’s three largest cities: Mexico City, Guadalajara, and Monterrey. It has an altitude of 1850m and a population of around a million. The well-preserved historic centre (listed as a UNESCO World Heritage site in 2010) gives it the atmosphere of a smaller, more intimate town with a more relaxed pace of life.

‘San Luis’ is the city’s patron saint and was King Louis IX of France. ‘Potosí’ was added on to lend lustre from association with the fabulously rich mines of Potosí in Bolivia, discovered 40 years before silver and gold mines were found locally which led to the founding of San Luis in 1592.

There is a growing tourist industry and the Marathon has played a significant part in attracting visitors. The race starts from the Plaza de los Fundadores, right in the heart of town amid all the rich colonial architecture.

I woke at 05.30. The night before I had prepared for my runner’s ritual, pinning my race number 459 on the front of my shirt, on the back you could read my name ARMANDO, together with the Mexican symbol of an eagle’s head and the word MEXICO. After a light breakfast of cereal I checked that the soles of my running shoes were properly placed.

I drove towards my office to park and use the toilet before reaching the crowds and then walked towards Founders’ Square through my beautiful colonial city with its pink stone facades: the Ipiña Portals, the Loretto Chapel, the Church of La Compañia and the Central Building of the University.

I got to the start at 06.45 and took up a position near the back of the 3400 runners who were already lined up. I found myself standing very close to the School of Engineering building where I studied Mechanical and Electrical Engineering from 1963 to 1968.

I managed to greet several friends but soon the countdown started and the starting shot rang out. I spent about three minutes shuffling forward until I got to the timing mat, and in doing so passed by the podium where I got to greet AIMS President Paco Borao and race director Jaime Morales.

Shortly after starting to run you fall into a contemplative silence. I remembered that in 1982 I had run my first marathon, and on 28 August 1983 my first Tangamanga Marathon — 33 years ago. As those memories flooded back to me we went past the crowded neighbourhoods of Tlaxcala and Santiago with their colonial buildings framing the marathon route. We then headed towards Tangamanga Park no.2 and took a lap around its perimeter. Next we passed by Benemerita Normal del Estado (State’s Teachers School). At 15km I met my friend Luis Manuel Ponce who would accompany me for a few kilometres. At 25km I experienced my first emotional high as I was cheered on by my son David together with my grandson Ferrán in Carranza Avenue: three generations united for this special occasion. I kissed my grandson and pressed on through the university area, where I am now a faculty member.

The kilometres rolled by until Luis Manuel said goodbye at 28km but I was awaited by Enrique Martens and Alejandro Leal Tovias who had run together with me during the first ever Tangamanga Marathon in 1983. They were joined by their children Maria and Kako, and the great masters athlete Juanita Solano. Together we entered the extraordinary Tangamanga Park no.1: the second urban park in México and the place I call my second home.

A little rain felt like a gift from heaven in preparing us to tackle a tough climb. Shortly before leaving the park my son David joined the support team and brought me some Gatorade. Then we were greeted by my sister Chiquis who had come all the way from Italy. The immensity and beauty of the park took me by surprise: I sensed moisture on my face. The park was my witness for this important challenge I was about to accomplish.

My support team made the last kilometres a friendly adventure. We reached the Caja del Agua, which during colonial times served as a water reservoir for the city; then the ancient neighborhood of San Miguelito, with the church and convent of San Francisco where I got married back in in 1979. We continued along University Avenue past San Augustin Church to reach the Alameda and turn at the Templo del Carmen, where the beautiful Teatro de la Paz and Mask Museum are located. We came to the Plaza de Armas and passed in front of the Cathedral and the Municipal and Government Assemblies. At last I could see the Finish line in the distance. I reached the finish with the two colleagues with whom I ran the first edition of this marathon. They raised my arms as we crossed the line and we melted into a hug. The clock showed 5 hours 23 minutes.

There are some things in life that are priceless because they are founded in imagination, solidarity, effort and friendship, all of them values that money cannot buy. That’s how I managed to run my 30th BMW International Tangamanga Marathon at 70 years and 10 months of age. It was my dream come true.