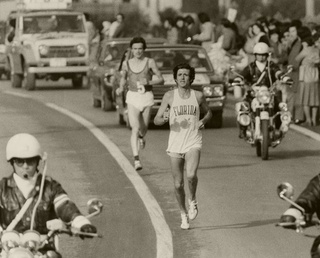 Shizo Kanaguri gave the starting signal. This was the Kanaguri Prize Asahi Marathon, the first forebear of the Fukuoka International Open Marathon Championship which celebrates its 70th edition on 4 December 2016.

Kumamoto is the birthplace of Shizo Kanaguri, the “Father of the Japanese marathon”. Kanaguri was the first Japanese Olympic athlete, competing in the Stockholm Olympic Games of 1912. The aim of inaugurating the race was to honour Kanaguri’s achievements.

In reality, the hidden aims of holding the race were to bring good news through sport to the Japanese people, who were suffering post-war turmoil and depressed morale, and to reinstate the reputation of Japanese marathon running in the international sporting world. The Asahi Shimbun (Japanese Newspaper Company) and the executive members of the Japanese Amateur Athletic Federation (JAAF) organised the race.

On 3 October 1947 the Asahi Shimbun carried an official announcement: “We invite participation from all quarters, so that this race will be the springboard for the coming Olympic marathon and the foundation for resurrecting the marathon in Japan.”

After the second race, new host cities were named, and Takamatsu, Shizuoka, Hiroshima, Fukuoka, Ube, Nagoya, Kamakura, Utsunomiya and Tokyo each served as subsequent race venues. The marathon played an important role in the spread of the sport throughout Japan. Beginning with the eighth race, foreign athletes were invited to participate, in order to make the race an international event. The marathon has been held in Fukuoka every year since the 18th race.

In the early years of the race Japan was still suffering from food shortages. Some athletes brought their own rice because they could not eat enough to run the race using the meal vouchers they received for it. Despite such hardship the races during that time were highly competitive and provided the public with spectacle and excitement. Race records were regularly broken. In 1950 three of the top ten times recorded in the world that year were set in the race.

At the 1964 Tokyo General Assembly of the International Amateur Athletics Federation (IAAF) the Managing Director of the JAAF put forward a proposal to hold a world championship marathon race. The decision was postponed, but after several twists and turns, a race in Japan was finally approved as the International Open Marathon Championship.

The Fukuoka International Open Marathon Championship, which has seen many memorable races involving Japanese and overseas runners over the years, has been awarded an IAAF “gold label”. The organisers hope the race will continue to serve as a dignified sporting event and continue to lead the way in the world of international Marathon running.

Fukuoka’s Hakata Station features a marathon monument at which the cast footprints of past winners are on display.