Elites race some of Ottawa's best times ever, five qualify for Rio Olympics 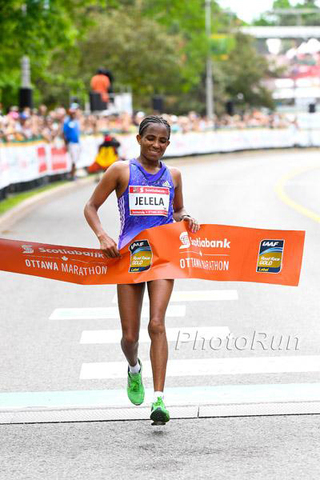 Hot and humid temperatures forced a detour for some runners at the 2016 Scotiabank Ottawa Marathon.

Shortly after 11 a.m. at around the 4-hour mark of the race, officials made a weather-based decision to close a roughly 10 kilometre stretch of the marathon course to remaining runners returning to Ottawa from Gatineau via the Alexandra Bridge.

At their pace this meant about 1 ¼ hours less time on the roads at what would be the hottest point in the day, with expected humidex readings as high as 40 degrees C.

It was a different story in the earlier part of the day, where spectators witnessed an Ethiopian sweep in both the men’s and women’s categories.
Hot weather conditions didn’t do much to slow down the frontrunners and Rio Olympic Games hopefuls, who delivered some of the marathon’s strongest performances ever. Ottawa was a preferred destination for many elite-level athletes looking to secure an Olympics berth.