Energy supplier and race agree partnership through to 2018 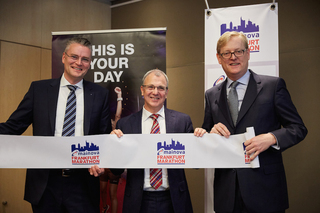 The announcement marks a new chapter in the longstanding and proven partnership between Germany’s oldest city marathon and Hessen’s biggest energy provider. Mainova has already been for some time the chief supporter of the Children’s and Youth competitions, “The Kids Race powered by Mainova” and the “Mainova Mini-Marathon”. In future the regional service provider will concentrate on the main race over 42.195 kilometres but will retain its links as partner with the junior races.

Mainova’s chairman Dr. Constantin H. Alsheimer commented: “The involvement with the Frankfurt Marathon is the guiding light of our new running sponsorship. The race is the most important mass participation sports event in the Rhein-Main region. The marathon attracts around 25,000 ambitious and committed runners to our mutual home region every year. In addition there are the hundreds of thousands of fans who cheer the runners along the course and celebrate a great festival of mass sport.”

Race director Jo Schindler expressed his delight: “Mainova AG as Germany’s fifth largest energy supplier has, with its choice of the Frankfurt Marathon in its home city, selected the best platform to give living proof of energy and sustainability. The classic race as one of the greenest marathons in the world and Mainova with its attractive Eco-offers make for a great combination.”