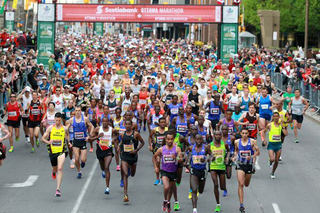 Organisers have seen an impact on the elite field in the lead-up to the Summer Olympics in Rio de Janeiro. Some well-known marathoners familiar to Ottawa fans, including Canadians Reid Coolsaet and Lanni Marchant have already qualified for the Games and are taking a pass on the marathon to pace their training. For others it is a last opportunity to qualify, and as many as seven runners from several countries are eyeing Ottawa as a flat, fast course to secure an Olympics berth. Despite these factors, organizers say event records could topple – even the marathon record on Canadian soil.

Ethiopians could dominate the course for the third year running, based on how the roster is shaping up. Last year’s winner in the men’s category, 29-year-old Girmay Birhanu, is returning to defend his title and shave time off his 2:08:14 finish. He’ll face hot competition from fellow countrymen Dino Sefir and Megersa Bacha, who boast personal best times of 2:04:50 and 2:07:14 respectively. But a win won’t be handed to the Ethiopians on a silver platter. They’ll need to keep a sharp eye on the Kenyans and particularly Vincent Kipruto, who comes to Ottawa with a 2:05:13 personal best under his belt.

Ethiopians also dominate the top 10 women. Aberu Mekuria, 32, will be at the start line hoping to defend her Ottawa title and improve on her last year’s 2:25:30 winning time. She could be joined by as many as five of her compatriots including Koren Jelela, the current Canadian-soil record holder. Leading the charge against the Ethiopians is Kenyan Isabella Ochichi, a 5,000 metre Olympic silver medalist. Canadians Rachel Hannah, Tarah Korir and Leslie Sexton are also on the start list and hope to achieve the Canadian Olympic standard of 2:29:50.

If it’s a good day, organizers believe the 2016 Scotiabank Ottawa Marathon could continue to build on its reputation as Canada’s fastest course. Ottawa already boasts the best marathon time for men on Canadian soil and has had the fastest men’s marathon in Canada for the last two years. If the women can beat the 2:22:43, set by Koren Jelela in 2011, the winner would take home a new Hyundai Tuscon from Ottawa’s Pathway Hyundai and add to the Tamarack Ottawa Race Weekend’s already long and impressive list of records.