Nothing new — and not out of Africa 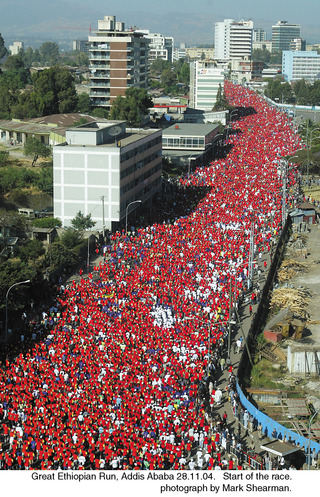 Some interested person sent me a press cutting from the International New York Times last month (10 Feb 2016: “Security fears hang over African Marathons”). It’s just my opinion — but I have seldom read such a rubbishy piece of journalism.

While I don’t contest the facts — I am sure they have someone whose job it is to check them — the way in which they are presented is at best misleading. The logic is so flawed that it is hard to find another word to describe it than ‘ridiculous’.

The author states that:

i) African distance running events are on the increase (perhaps even more so than according to the worldwide trend).

ii) There have been some terrorist incidents in African countries (Mali, Burkina Faso, and Nigeria are cited)

iii) On one occasion, two terrorists detonated bombs at a marathon (not in Africa, but in Boston).

The article seems to suggest (the logic is missing, so it can hardly be called an argument) that because a bomb once went off at a marathon on another continent* and because more and more marathons are staged in African countries and because terrorists are active in some African countries — we must therefore expect these events to be bombed.

What a lot of old rubbish. The facts need re phrasing and placing in some context.

i) African distance running events are on the increase (perhaps even more so than according to the worldwide trend).

ii) There have been terrorist incidents in African countries (Mali, Burkina Faso, and Nigeria are cited, but we can also add Egypt, Tunisia, Cote D’Ivoire, Algeria, Somalia and Kenya).

iv) there are three countries common to these two lists: Cote D’Ivoire (where the terrorist incident at a resort hotel in March occurred after the article had been published) Nigeria and Kenya. Yet Kenya has held a high-profile Marathon (and hundreds of other local races) for many years without incident, and Nigeria has put on several races which have attracted foreign elite runners, also without incident.

Where the authorities ask fairly searching security questions of organisers in Africa – for example in South Africa – these focus primarily on the more common concern of traffic control and the installation of temporary race-related infrastructure rather than the possibility of bombs going off.

Where bombs do go off — outside of fully-fledged war zones — tends to be in European capital cities (as I write this news of the Brussels Airport and metro bombings was breaking). But even then there is no discernible connection to the many marathons that are run in Europe. The only incident of which I am aware was the cancellation of Macedonia’s Skopje Marathon in May 2015 on the eve of the race after an incident earlier that day in which eight policemen were killed in an anti-terrorist action in Kumanovo (a town 40km from Skopje). In a subsequent statement the marathon was cited as being one of the targets of the terrorist group.

Even the bombing which happened at the Boston Marathon two years earlier seemed not to have been specifically pre-planned. The Runners World website reported that according to wire agencies Dzhokhar Tsarnaev told the FBI that he and his brother Tamerlan had chosen the marathon finish area because it was a “target of opportunity.” The brothers had originally planned their attack for Independence Day on 4 July but finished making their bombs earlier than expected and picked the crowded, open, high-visibility finishing stretch of the marathon instead.

The Great Ethiopian Run is the largest running event in Africa with over 40,000 runners massing in the centre of Addis Ababa for the race start. Race director Ermias Ayele, who has also worked on running events in South Sudan, Liberia and Ghana, argues that despite the huge numbers the impact of a terrorist attack would probably not be as far-reaching as an attack on a more everyday event. “People only come to the race once a year but they go to the market at least on a weekly basis. If you want to spread a climate of fear and suspicion and disrupt people’s lives then you would target somewhere that they go regularly”. The frequent attacks on public transport facilities in major cities would appear to lend support to this view.

Rather than acting as targets for terrorists mass participation marathons have more frequently acted as a medium through which the healing process is manifested. They have provided a means by which to express feelings of solidarity and affirmation in the aftermath of terrorist outrages. Such has been the case in Washington DC and New York City in 2001, in Madrid in 2004 and in Mumbai in 2008 — all these cities held marathons within a few weeks of terrorist atrocities being committed. Is there any reason to suppose that marathons held in Cote D’Ivoire or Nigeria would not be able to fulfil the same purpose?

* In fact it has been twice: five years before the Tsarnayev brothers planted their bombs along the side of Boston’s Boyleston Street finishing straight a suicide bomber lined up at the start of an event in Sri Lanka on 5 April 2008 and detonated himself, successfully assassinating the Government Minister of Highways he had targeted. “Collateral damage” included killing two others – an Olympic runner and a national coach – and injuring ‘up to’ 100 runners who happened to line up for the race.