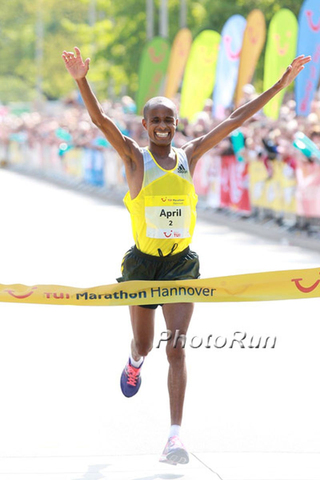 Three years after breaking the course record Lusapho April returns to the HAJ Marathon Hannover on 10th April. One of South Africa’s leading marathon runners, he clocked 2:08:32 on the very flat course in central Germany in 2013. This still remains the fastest time ever run in Hannover and his personal best as well.

Lusapho April will challenge the defending champion Cheshari Jacob. He is among a group of strong Kenyans entered for the HAJ Marathon Hannover which is an IAAF Silver Label Race. Meanwhile Germany’s Anna Hahner hopes to secure Olympic selection on 10th April.

Lusapho April will chase a record third win when he returns to Hannover. The 33 year-old took his first title back in 2011 when he ran 2:09:25, which remains his second best marathon time. The South African has a special bond to the HAJ Marathon Hannover. There is no other marathon in the world where he participated as often as in this race in Germany. Back in 2009 he ran his debut there and finished eighth with 2:14:19, then he improved to fifth with a personal best of 2:10:45 in 2010. After his two wins in 2011 and 2013 April returns for his fifth Hannover race and hopes to achieve a unique result in the history of the race. No man has ever won this marathon three times. But it will not be an easy achievement for the 33 year-old, who was third in the New York City Marathon in 2013.

“My main goal is to win in Hannover for the third time,” said April and added: “I hope that the pace will be targeting the course record. I would like to go for that as well.” Race Director Stefanie Eichel was happy to hear that Lusapho April’s training is going well. “We are delighted that Lusapho once again comes back to the HAJ Marathon Hannover and hope he can achieve his goals. When he raced here in the past he always produced emotional performances. Lusapho is a real crowd favourite in Hannover,” she said.

Five Kenyan runners are on the current start list who have the ability to run very well on this fast course. Cheshari Jacob did so last year, when he left five runners behind him with superior personal bests. The Kenyan won with 2:09:32 while the personal best of the 31 year-old stands at 2:07:46 from Frankfurt in 2013. Another former Hannover winner has been confirmed for the race: Duncan Koech took the race back in 2008 with 2:14:29. This had been his debut marathon and he enjoyed a fine marathon career afterwards. Koech ran his personal best of 2:07:53 when he was third in Cologne in 2012.

Martin Kosgey has a very good and more recent Hannover record. If he maintains his rhythm then he should finish runner-up this time. Two years ago Kosgey was fourth and in 2015 he improved to 2:09:50 taking third place. The fastest on the current start list is Philipp Kimutai. The 32 year-old has plenty of experience from major city marathons and features a personal best of 2:06:07. He ran this time when he was fourth in Frankfurt in 2011.

The most prominent name on the start list is that of Moses Masai. The former 10,000 m world-class runner, who took a bronze medal at the 2009 World Championships and was fourth in the Olympic final a year earlier, has not yet managed to transfer his enormous potential to the marathon distance. After improving to 2:10:36 in Duesseldorf in 2014 he did not compete much and did not run another marathon. However on the flat course of Hannover the 30 year-old Kenyan wants to give it another try.

The women’s field could produce a German winner for the first time in more than ten years. Anna Hahner is the fastest runner entered with a personal best of 2:26:44. The 26 year-old ran that time when she sensationally won the Vienna City Marathon in 2014. More recently Hahner clocked 2:30:19 in the Berlin Marathon. She will look to improve on that time to secure nomination for the Olympics.

Anna Hahner’s toughest rivals will be Ethiopia’s Tizita Terecha Dida and Kenya’s Edinah Kwambai. Dida won last year’s Guangzhou Marathon in China with a PB of 2:28:02 while Kwambai has a personal record of 2:29:35. She was second in Hannover three years ago with 2:29:49.