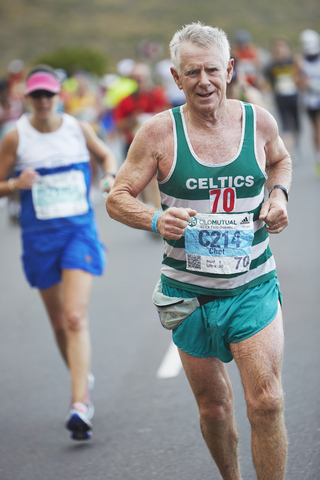 Chet Sainsbury, Race Director of the Two Oceans Marathon for 27 years, died on 23 February 2016. He held many positions within the road running fraternity, including serving on the South African Road Running Commission, acting as Vice-Chair of Western Province Athletics and as Chairperson of Western Province Road Running and the Celtic Harriers Club. He was an active measurer in South Africa throughout the 1990s.

Chet was an ardent supporter of the Comrades Marathon and was a “Green Number” runner having completed more than 10 of the 89km races – in fact 14 of them between 1978 and 1991. He ran his final Comrades in the year 2000 in the 75th commemorative edition of the race.

CMA Vice Chairperson Cheryl Winn says: “Chet was synonymous with the Two Oceans Marathon, Western Province Athletics and South African distance running. He was strongly principled, incredibly energetic, organised and methodical to the extreme. I remember when he fell within a kilometre of the start of the 1989 Comrades Marathon and crashed his elbow into a curb. He strapped it to his chest and ran through 90km of discomfort and increasing agony to earn his eighth silver medal.”

Two Oceans Marketing Manager Stefanie Schultzen says: “He was a mentor and leader to me and many others. He contributed so much to athletics and his legacy will be felt for a long time to come.”