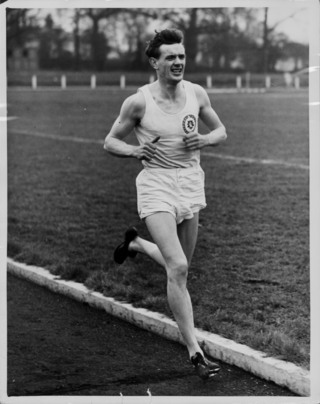 John Disley, former world record holder in the 3000m steeplechase and co-founder of the London Marathon, died on 8 February after a short illness.

Born on 20 November 1928 Disley, from Corris on the southern slopes of Snowdonia in North Wales, became Britain’s first world-class steeplechaser and lowered the British record five times — from 9:18.4 in 1950 to 8:44.2 in 1955. He only took up athletics after attending Loughborough College in 1946 and meeting the coach Geoffrey Dyson.

Educated at Oswestry High School in Shropshire, Disley was quoted in an interview
in the British publication Athletics Weekly in 1951 that he had never seen an athletics track until he went to Loughborough. On arrival there he ran a mile in the Freshers’ Sports: before that his running had been at annual cross-country runs and school sports.

He broke the nine-minute barrier at the 1952 Helsinki Olympics when he improved from 9:11.8 to 8:59.59 in the heats and to 8:51.94 for the bronze medal in the final. Four years later he entered the Melbourne Olympics as Britain’s No.1. Although he nearly matched his best, running 8:44.6, he placed sixth in the final won by his teammate Chris Brasher. Disley and Brasher formed a friendship which endured well beyond their athletics careers.

Disley ran for the club London AC and was a schoolmaster in West London during his running days before becoming the first chief instructor at the flagship national mountaineering and outdoor pursuits centre, Plas y Brenin in Snowdonia. He and Brasher ‘imported’ the Nordic sport of orienteering in Britain from the mid-1960s and Disley took over from Brasher as chairman of the British Orienteering Federation from 1970–72. In a later development they instituted rules for conducting relays on long-distance footpaths in the United Kingdom.

A former vice-chairman of the UK Sports Council, Disley received royal honours in 1979 for his work in outdoor education.

Disley and Brasher were both members of the Ranelagh Harriers club in London during the 1970s. In 1979 Disley, Brasher and another clubmate took third place in the South of England Veterans’ Cross-Country Championships despite Disley and Brasher arriving late and missing the start. Later that year they travelled with a club group to run in the New York City Marathon and were so impressed by it that they resolved to put on a similar event in London.

They convinced the London authorities, the police, the athletics federation and the London Tourist Board to back their efforts and secured commercial sponsorship. The first London Marathon, with 8000 entries, was held in March 1981— only a year and a half after their visit to New York.

Disley took particular responsibility for the course — a clever design which followed the River Thames and included a 15km loop around the then largely derelict docks area to minimise traffic disruption. It has stood the test of time and remained substantially intact despite the redevelopment of the docklands into London’s new financial centre.

But his influence extended to more than just the London course. He developed an interest in the measurement and verification of road race courses. In 1985 a new marathon “world record” (only recognised as such from 2005) was run in Rotterdam by Carlos Lopes. Disley was one of an international team of measurers who checked the course — the first time this had been done.

John Disley was aware that for times to be credible a world-class event with fast runners needed to have its course vetted beforehand by independent measurers. At Disley’s invitation Pete Riegel of USA Track & Field travelled to London a week before the 1987 London Marathon to check the length of the course. During the race he rode in the lead vehicle to verified that course was run as measured.

Disley and Riegel established a firm friendship. Together they wrote the official manual “The Measurement of Road Race Courses”(1991) and served as two of the four administrators of a worldwide system of road race measurement.
The measurement and verification procedure pioneered by Disley set a new standard which more and more big races started to follow. This was instrumental in World records in road running finally being recognised by the world governing body in 2005..

John Disley won major awards throughout his life — such as BBC Cymru Wales Sports Personality of the year in 1955 and a place in the Welsh Sports Hall of Fame in 2007 but an award is also made in his name. In 2015 Paula Radcliffe was the first recipient of the John Disley Award for Lifetime Achievement in running.

Chris Brasher’s son Hugh, now the London Marathon race director, said: “John inspired so many people with his love of running and the outdoors and has left a legacy that is now part of the fabric of British society.”

He is survived by his wife Sylvia, who also won a bronze medal in the 1952 Helsinki Olympics on Great Britain’s 4×100m relay team, and their two daughters.