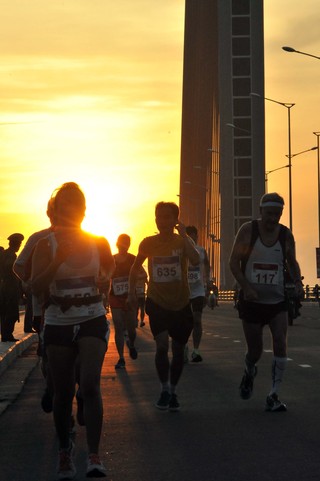 Da Nang’s coastline, stretching out over a distance of 30km, is renowned for pristine white sand beaches with crystal-clear blue water. It is popular for fishing, water-skiing, diving, and yachting. Forbes Magazine (USA) rates Da Nang as one of the six most beautiful beaches in the world. Da Nang’s green environment and reduced pollution and traffic congestion won it a First-Class City listing. It is considered as the most ‘liveable’ city in Vietnam.

The Da Nang International Marathon also offers a half marathon and a 5km fun run. The course allows you to experience the beautiful coastline, the surrounding mountains and the city itself with its bridges across the poetic Han River at sun rise. The sights and sounds surround you as you breathe in the fresh air during each stride of your run. Come to run in Vietnam and let its alluring beauty usher you towards one of the milestones in your running life.

About 10km to the north east from Da Nang city is a long thin peninsula, Son Tra, with a peak of 693m above sea level (called Monkey Mountain by US soldiers). West of Da Nang the My Son ruins used to be the capital and religious centre of the Champa Kingdom but was badly damaged by bombing in the 1960s. It was declared a UNESCO World Heritage Site in 1999. There are many other places worth visiting such as the Marble Mountains — rocky limestone jutting out of the beach to the south and Ba Na Hill — the resort located in Truong Son Mountains with 5km cable car up to its peak at 1487 above sea level. The old town of Hoi An — a UNESCO World Heritage Site 30km from Da Nang — will transport you back in time. A longer trip will take you north through the Truong Son Mountains — which offer tremendous views from the top — to the charming and peaceful city of Hue, capital of the Nguyen Kingdom.

The race is organised by the Da Nang People’s Committee in co-operation with Pulse Active. Funds raised through the competition go to the Da Nang Cancer Hospital Fund.