Beaches and narrow streets: memorable for the heroics of runners in Ireland’s Viking Triangle 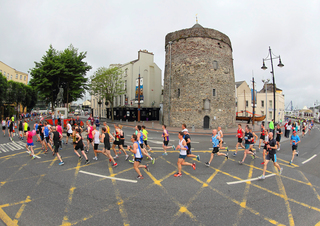 Waterford is a seaport in the southeast of Ireland and is the country’s oldest city. It was founded by Viking raiders in AD 914 and despite extensive redevelopment the city retains vestiges of its Viking and Norman past in its narrow streets and town walls.

Even today locals keep their Viking past close to their heart. The city’s central point is the ‘Viking Triangle’, where three excellent museums tell the story of Ireland’s Middle Ages better than anywhere else in the country. Here, in the heart of the Viking Triangle, lies the starting line for Waterford Viking Marathon.

Waterford has a strong sporting connection being the home town of John Treacy — who twice won the World Cross-Country and took a silver medal at the 1984 Olympics in Los Angeles.

Now in its fifth year the Waterford Viking Marathon has already established itself on the nation’s running calendar and continues to grow, as participation levels increase year on year. Over 2500 runners are expected for this year’s race on 25 June.

The event offers something for everyone, with half and quarter marathon as well and this year a three-person relay competition has been introduced. The courses are flat and fast. Runners meander through the narrow Viking city streets down to the infamous Quay along the River Suir and out to the city suburbs. The full marathon route then splits off towards to the small seaside town of Tramore, where runners take in the beautiful promenade of this sandy beach.

Encouraged by bands and musicians along the roadside, runners make their way back towards the city to the finish line at Waterford’s Regional Sports Centre. This venue offers a unique opportunity for an Olympic-style lap finish. A festival feel takes over as a non-stop stream of determined runners cross the line to be met by family and friends with many extraordinary and emotional moments to behold.

All finishers receive a unique collectable Viking-themed medal — the design of which is much anticipated each year — and a high tech t-shirt and goody bag. The Waterford Viking Marathon supports selected local or national charities each year and for 2016 the chosen charity is Pieta House, renowned for its work to prevent self-harming and suicide in Ireland.

Waterford Viking Marathon is memorable not only for the heroics of its participants but for the sense of Waterford’s ownership of the event as local people have taken it to their heart.