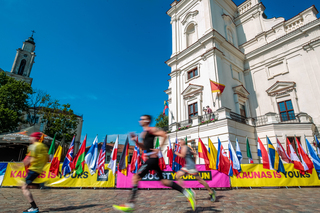 Start this summer by attacking your marathon best (or another shorter distance) in the historical but yet undiscovered second city of Lithuania, Kaunas. Start in the city hall square, dating from the 16th century, run by the remains of Kaunas castle, built in the 14th century, and enjoy the flat route beside the confluence of the two biggest rivers in Lithuania, the Nemunas and the Neris. Nearby lies the Kaunas Reservoir, the largest body of water in Lithuania.

The city features examples of Lithuanian architecture from the Medieval, Gothic, Renaissance, Baroque, Modernist, Soviet era to modern times. Kaunas is sometimes still called “the temporary capital” of Lithuania as it was officially (the only one in the world) during the inter-war years when Polish forces occupied Vilnius.

Like the city itself the marathon is still being discovered by the world at large. Still in only its fourth year it is drawing ever larger fields as the historical setting and flat course attracts the attention of runners from further and further afield. Last year’s winner, Antonia Johnson from Scotland, commented: “It was so flat and nice to run that you can go for your personal best. Running two laps through the old town and beautiful parks was fun. The gentle breeze from the rivers helped too.”

The difference between the lowest and highest points of the course is just 14m, something that even the renowned world record course of Berlin cannot boast. Course records stand at 2:28:18 by Aurimas Skinulis and 3:06:43 by Elena Simonok but the growing popularity of the race makes it likely that these records will be improved upon on an annual basis for the next few years. To encourage the chances the organisers are offering a 600 euro bonus. In 2016 the Lithuanian marathon championships will be incorporated within the event.

But most of the 5000 participants take part in the 5km and 10km races. Those also pass through the historic old town with its century-old brick-paved streets and through Confluence Park, where the Nemunas and Neris rivers meet.

Live music, dancers and even extreme street sports enthusiasts like parcour or BMX demonstrate their routines in the Kaunas Marathon. It’s not just about running, it’s a festival for the whole city. The fun is centred on Rotušės (City Hall) square, the heart of the city and the main location for all celebrations in the city.

Nearby lies the Kaunas Cathedral Basilica. No one really knows when it was built but it was mentioned in written sources in 1413. Runners then head along Vilnius Street towards the New Town and continue on the pedestrianised Laisvės alėja (Freedom Avenue) through the commercial centre of the town. The now-not-so-New Town features distinctive interwar architecture for which the European Commission awarded Kaunas the ‘European Heritage’ Label. In 2015 Kaunas was declared a member of the UNESCO Creative Cities Network, the only one with this title in Eastern Europe.

Come to Kaunas to start your summer. The journey – by train, car, boat or plane – is easy. The airport is only 20 minutes from the city centre.