Seals, dolphins and even sharks provide a sensational backdrop to the flat and fast city-to-sea course 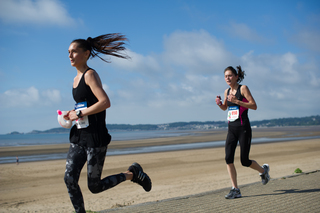 Swansea, the second city of Wales with a thousand-year history, will stage only the third edition of what is already the second largest race in the country on 26 June. Last year 5000 runners took part, coming from 25 countries – but 8000 are expected to show up this year making it one of the fastest growing half marathons in the UK.

Poet and Under Milk Wood author Dylan Thomas is the city’s most famous son and Oscar-winning actress Catherine Zeta-Jones its most famous daughter — but on race day the beauty will be supplied by the scenery of the city. Swansea Bay, home to grey seals, dolphins and even basking sharks, provides a sensational backdrop to the event.

The iconic flat and fast city-to-sea course holds many scenic highlights. Within a kilometre of the start the field snakes past Swansea Castle, built in 1106 by the first Earl of Warwick. Runners pass St Helen’s rugby ground at 3km where West Indian cricketing great Sir Garfield Sobers smashed six sixes off an over from the hapless Malcolm Nash 862 years later (in 1968). At 10km runners turn back towards Swansea along the promenade with Wales’ tallest building, the Meridian Tower, acting as a distant beacon by which to measure their progress.

Technical director Nick Francis says “the course is incredible; you run along a 10km stretch of Swansea Bay. Everyone mentions the views with some comparing it to the most scenic race destinations across the World. We want to give runners the best experience possible.”

Last year, Great Britain international and Rio 2016 hopeful Dewi Griffiths sprinted across the city centre finish line in front of thousands of spectators to set a course record of 1:06:48. Emma Wookey claimed the women’s prize with 1:17:51. Both have vowed to go faster in 2016, after being appointed the event’s first ever race ambassadors.

A wheelchair race was incorporated in 2015 while the 2016 race introduces two starting ‘waves’ to help cope with the rapidly growing numbers. There are already further plans for future years: Race director David Martin-Jewell says: “We aim to become an IAAF accredited race at Bronze level and are preparing the ground to attain this status.”

Nick Francis adds: “we want to develop a race that is value for money, one runners enjoy and which makes them want to come back year after year.” And why wouldn’t you want to come back to a city also known for its Premier League football team Swansea City and top rugby union outfit Ospreys – which makes it something of a sporting mecca?