The Scotiabank Vancouver Half & 5km is quintessentially Vancouver. This is the Canada that the world thinks of; mountains, ocean, and magnificently large trees. 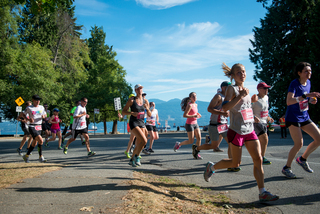 Jericho Beach, approximately 12k in into the Scotia Half. “Only the scenery takes your breath away!”
Photo: Robert Shaer
© Robert Shaer/Canada Running Series

Stanley Park is one of the world’s largest urban parks, with 400 hectares of forest, rock, towering Douglas fir trees, totem poles, rose gardens, an aquarium, an outdoor swimming pool, and 27 kilometres of trails as well as its Seawall that hugs the surrounding Pacific Ocean.

For 18 years the point-to-point route of the half marathon has remained essentially unchanged, plunging down from the University of British Columbia to the Pacific shores of Spanish Banks, and on to the finish line in world-famous Stanley Park. The accompanying 5km is staged within the park, around Lost Lagoon and along the Seawall. In 2015 the race drew 4000 participants in the half-marathon and 2200 in the 5km – with runners from eight Canadian provinces and 29 countries.

The event is famed for its post-race party atmosphere amidst the tall trees of the park with the Pacific Ocean and snow-capped mountains as a backdrop.
The race is the fifth event in the Canada Running Series – which culminates at the Scotiabank Toronto Waterfront Marathon in October. The circuit began in Toronto in 1990 as a six-pack of road races sponsored by Coors Light. In 1999 it was expanded to Montreal and Vancouver. The Vancouver Half & 5km were created as a brand new event with Scotiabank as the title sponsor for the duration.

The “Scotia Half” attracts top Canadian distance athletes but at the same time offers a quality event for British Columbia’s outdoor community and support for the charities of the Greater Vancouver Area. Introduced in 2007, the Scotiabank Charity Challenge raises nearly C$1 million a year for 80 local charities who show their support with costumes, entertainment and high-energy.

The Scotiabank Vancouver Half & 5km is quintessentially Vancouver, and offers a jumping-off point to explore the magnificent Canadian Pacific Northwest with its towering mountains, wildlife-packed forests and dramatic coastline. This is the Canada that the world thinks of; mountains, ocean, and magnificently large trees. A place where you can run in the morning, go skiing in the afternoon and sailing in the evening.

In 2013 the race became the first in Canada to receive certification from the Council for Responsible Sport in Oregon for its “green” initiatives. The race is close to downtown and you can visit the Capilano Suspension Bridge, or hike the nearby “Grouse Grind” in the North Shore Mountains. For the adventurous there are ferry trips to the Gulf Islands and Victoria, the Sunshine Coast, and cruises through the Inside Passage to Alaska.

June is one of Vancouver’s driest months with temperatures averaging 10–20C throughout the day. Canada Day follows race weekend, celebrating the founding of Canada on 1 July 1867.