The first AIMS Children’s Series race of 2016 was held in the village of Khanivali, 80km north of Mumbai 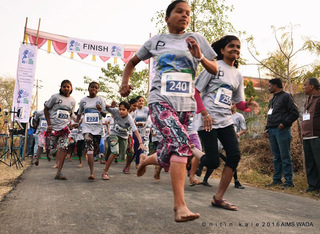 The first AIMS Children’s Series race of 2016 was held on 24 January in the village of Khanivali, 80km north of Mumbai, the first time the Series has ever hosted an event in India.
Photo: Nitin Kale
© Nitin Kale

The first AIMS Children’s Series race of 2016 was held on 24 January in the village of Khanivali, 80km north of Mumbai, the first time the Series has ever hosted an event in India.

Just under 500 children from the Anand Laxman Chandavarkar Vidhyalay secondary school participated in a 4km fun run. AIMS launched the Children’s Series in 2006 to assist selected member races in promoting running among children in areas of need.

The school, attended by children from mainly farming families, hosted boys’ and girls’ races for the eighth, ninth and tenth grades. The children raced over a traffic-free out-and-back 4km course on mainly tarmac road. The gently downhill first kilometre to the bridge over the river made for some fast starts. The girls’ races were set off five minutes after the boys so that there was only limited overlap and the interval between age groups was sufficient to allow almost all the field to have completed before the next race followed. All completed the course and some with impressive timings, the fastest of the day being 14 minutes 27 seconds. Comprehensive chip-timed results were available following the race.

There was a good incentive to run fast as the first three in each category – 18 in all – were awarded with bicycles and a pair of branded running shoes. AIMS Secretary Hugh Jones attended and assisted with the prize giving. All those who ran received probably the most goody-laden finisher bag ever offered anywhere: the bag itself was a canvas school backpack and it contained a blanket, cap, water bottle, pens, crayons, notebook and maths instruments as well as a skipping rope and two rubber balls, packets of food and toiletries. And that wasn’t all: along with the finishers’ medals and certificates everyone received a personal Fuji Instamax Polaroid of them with their medal, an analogue watch, a pair of canvas shoes (the children had been individually measured up the previous week) and two pairs of socks.

Race director Amit Sheth, who had recruited an organising team including the school staff, members of the Inner Wheel Club of Bombay Sea Coast, the Borivali National Park Green Runners from north Mumbai and a wide range of family and friends, was pleased with how the race went.

The other 2016 AIMS Children’s Series events are scheduled to take place in Ecuador and South Africa.

AIMS Secretary Hugh Jones comments: “I am delighted that I was able to attend this Children’s Series event and see first-hand the great work that has been done on behalf of the children here.”

AIMS Co-ordinator of the Children’s Series Martha Morales comments: “We are delighted to begin the 2016 AIMS Children’s Series in a new location in India. We look forward to an even bigger and better event next year.”

AIMS President Paco Borao comments: “We would like to thank the organising committee for their excellent efforts in organising such a successful Children’s Series event. We are gratified to see how much joy this event has created among the children who participated.”