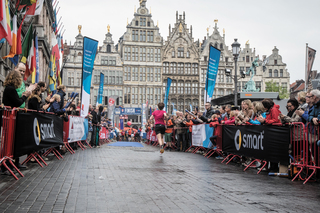 The race started in 1986 with only 800 participants but has grown to become the most popular running event in Belgium with 40,000 participants every year.

It could be called a “giant” event. The Marathon finishes on the East bank of the River Scheldt at the fountain of Brabo on the Central Market Square. According to legend Brabo was a warrior who refused to pay a toll to the giant Antigone. He killed the giant, cut off his hand and threw it into the river. The name Antwerp (“hand throw”) derives from this legend.

Runners who cross the River Scheldt today need not fear: there are no nasty giants and you don’t need to pay any toll. To reach the East Bank you run through the 1717m-long tunnel “Waasland” [the “rabbit hole” as it locally known].

There is also the better-known 590m-long Kennedy Tunnel: best known as a record-breaker in in traffic jams. But on race day cars are banished and the tunnel reserved for the tens of thousands of runners.

The Central Market Square, with its renaissance style City Hall and the Brabo fountain lying in the shadow of the 123-metre high St Mary’s Cathedral, is one of Antwerp’s many historical sights. Rubens’ House and the ‘Museum on the Riverside’ are two of the many highly-rated museums in Antwerp. The Meir is the central shopping boulevard in town. All lie on both the 10 Miles & Marathon courses. Besides the main races there are also the 5km Fun Run, Women’s Run and a 1400m Kids Run.

All events start on the West Bank although the Marathon departs from a different location to the other races. To get to the Marathon finish at the Central Market Square on the East Bank spectators cross the river through the pedestrian tunnel or by taking the Flandria ferries which are free of charge on the day.

Antwerp makes a wonderful destination for a weekend away. Being one of the largest ports in Europe brings a certain atmosphere to the city. The city is also famous for fashion and diamond-cutting. Many great restaurants are spread across this young and dynamic city, only 30 minutes away from Brussels Airport.