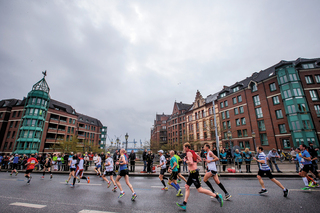 Last April Hamburg rolled out the red carpet for almost 15,000 marathon runners (including handbikers) to celebrate their 30th anniversary edition. The event includes the LOTTO Hamburg Relay Marathon and the Zehntel Kids’ race.

The Hamburg course is known for being flat, fast and scenic. From the red carpet at the start line the route leads runners along the magnificent waterways of the Hanseatic city: the Elbe River and its tributary the Alster. After the start at the Congress Centre runners rush down the Reeperbahn, Hamburg’s most sinful mile and centre of a vibrant nightlife and party scene. They then turn onto the prestigious Elbchaussee and loop back to the centre. Along the Elbe embankment participants get a glimpse of the grand harbour area. Other highlights along the River include Landungs­brücken, the Elbphilharmonie concert hall and the world’s largest warehouse district, the Speicherstadt. The unique grouping of red brick buildings have been recently awarded UNESCO World Heritage Site status.

After passing the city centre, the course heads north along the east side of the Alster and past Hamburg’s lush city park. On the way back into town and closer to the finish line runners pass some of the city’s most beautiful mansions which speak of Hamburg’s wealth. In the Eppendorf district runners experience unrivaled spectator support when they need it most — for the final couple of kilometres.

If you are looking to better your personal best or are thinking of making your marathon debut Hamburg offers not just a speedy route but unconditional support from spectators. No matter the weather conditions you can count on the crowd to put on a good party along the route. Hamburg loves its marathon, which is one of the largest sporting events in the city.

Although the majority of participants are local runners from over 106 countries take part, among them British, Danish, Austrian, Swiss and other nationalities. Being the largest spring marathon in Germany the Haspa Marathon Hamburg also attracts many national as well as international elite runners. Kenyan superstar Eliud Kipchoge, who was last year’s most decorated marathon runner, debuted in Hamburg back in 2013 and took the marathon to the next level by setting the course record of 2:05:30.