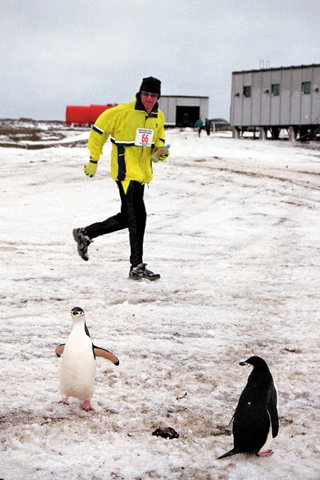 Explore the most pristine corner of the planet; come face-to-face with towering icebergs, penguins in the thousands, basking seals and breaching whales during this breathtaking trip of a lifetime.

First held in 1995 and now an annual event that sells out years in advance, the Antarctica Marathon weaves the allure of the marathon distance with a continent known for its stark unspoiled beauty, legendary lost explorers, unparalleled solitude and wildly windy, frosty weather.

“A visit to Antarctica is an experience not soon forgotten,” says Thom Gilligan, founder and president of Boston-based Marathon Tours & Travel and founder of the race. “Top that off with a well-fought marathon finish and it can change your life.”

Staged on King George Island, just off the tip of the Antarctic Peninsula, the full and half marathon races are run on rough gravel roads that connect the scientific research bases of Uruguay, Chile, China and Russia. Race-day temperatures can range from –10C to +1C with wind chills about six degrees lower. Heavy snowfalls are rare but light flurries, rain, fog and strong winds are common.

Care is taken to minimise impact on the environment in the sensitive ecosystem. The races are held over two consecutive days to abide by Antarctic environmental restrictions which allow no more than 100 visitors on shore in any single landing area. Race results from both days are combined to determine the winners and overall placings.

Getting to a marathon on what is referred to as the “Last Continent,” can be a marathon in itself. Athletes travel an average of 11,000km (7000 miles) to reach Buenos Aires before departing to Ushuaia, Argentina, the southernmost city in the world. There they board one of two converted Russian icebreaker ships for a two-day crossing of the Drake Passage, a body of water that has some of the roughest seas anywhere on Earth. The entire expedition spans 14 days and includes numerous landings on the continent, wildlife viewing and more.

“The inaugural Antarctica Marathon made it possible for runners to conquer a marathon on all of the earth’s seven continents,” says Gilligan. “In recognition of those runners who have achieved this Marathon Tours & Travel established the Seven Continents Club™.” Since then more than 560 men and women from all over the world have completed this quest.