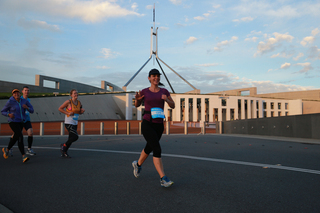 Australia’s oldest marathon, The Canberra Times Canberra Marathon, is among the events featured over the Festival weekend along with a Half Marathon, a 50km Ultra Marathon and well as the 5km and 10km fun runs. The 2016 event marks 41 years since the first Canberra Marathon was run. The 1984 edition was the selection race for that year’s Olympics — the first to include women.

Last year almost 6000 took part in the full range of events. The Ultra Marathon acts as Australia’s selection race for the World Ultra Marathon Championships in Doha in December.

All five courses are single laps to best explore the beautiful Canberra lakeside and surrounds. The 5km and 10km fun runs are held on the Saturday with both courses beginning in the National Rose Gardens and making their way along Lake Burley Griffin and through the Parliamentary Triangle before finishing near the Old Parliament House.

Canberra, the national capital, offers many sights for those visiting including the Australian War Memorial, the National Gallery of Australia and the National Portrait Gallery which showcases Australia’s identity, history and culture through portraiture. Outdoor sights include the Australian National Botanic Gardens, the Mount Majura Vineyard and Mount Ainsle Lookout.

One of Canberra’s most popular attractions is Questacon, a giant building filled with entertaining activities exploring science and technology that both adults and children will enjoy. The National Zoo and Aquarium offers an intimate view of a wide variety of Australia’s exotic native animals, On 3 April, just before the 2016 race, the Auto Italia Canberra event showcases the latest Italian cars, motorbikes and scooters.