What does a million people in one place look like? A peon by Hugh Jones 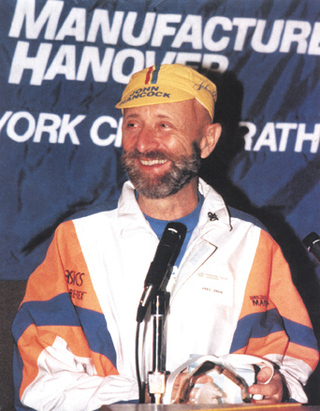 Oh Fred; icon of our sport that you are and visionary that you were. I am sure you knew that we would be going down this path…

You were our heroic frontman: you literally put the show on the road for us when you took the New York City Marathon out of the Park and onto the streets of all the Five Boroughs. We — the formerly tight-knit community of obsessives who were reticent even to admit to being marathon runners — were suddenly presented with our stage. You — with a little help from your friends — had presented us and our hitherto obscure sport with this great launchpad.

But then you were always looking further down the path than anyone else could imagine: first to achieve public acceptance and later populist acclaim. You achieved acceptance with that very first citywide marathon in 1976 but ‘acclaim’, like wealth, is something after which most people will hanker for more. There may be no ceiling to celebrity but it seemed you were always striving to find out if there was: and if so burst through it.

I can’t remember when any marathon organiser first claimed to have half a million spectators along their course, but it was a claim soon made — and most likely by you. But: half a million? That didn’t quite have the ring of the full ‘ten-to-the-power-of’ that a million had. So the zeitgeist obligingly escalated the figure.

It became the default response to any casual enquiry. I remember sitting in the London Marathon press office the day after the race some springtime in the late nineties. Someone shouted out, after receiving a question from a journalist of a national daily, ‘How many spectators did we have?’ Sitting there I reflexively suggested: ‘Tell them a million’. Ashamed as I am of that personal contribution to the myth — at the time it was simply a lazy shorthand reply to an offhand question — it has taken all this time to ‘fess up’.

You only have to do some junior arithmetic to see quite how ridiculous these million-spectator claims are:

# The marathon route can only be a maximum length of 42195m
# There are two sides of the road – so spectators can spread themselves along a [theoretical] maximum line of barriers totalling 84390m in length.
# Anyone face-forward along the barriers would take up at least half a metre, so only 168780 people can line themselves up against the barriers
# If there are a million spectators optimally disposed by lining up evenly along the barriers only 168780 of them will find space: the rest have to line up behind them
# 1000000/168780 = 6 [approx].

This means that for one million spectators to be present at a marathon they would have to line themselves up six-deep on either side of the road. This is for marathon courses that do not repeat the same bit of road [like New York, Boston and Berlin — but not London which repeats 2km as common out-back]. People lined up six-deep on both sides along the entire length of the course. Have you, really, ever seen that? I doubt it.

I have seen what could be an exceptional case. It was the London 2012 Olympic Games Men’s Marathon. The Men’s Marathon was just about the last event of the Games; it was the ‘Blue Riband’ event [with only the 100m to rival it for that claim], it was free to watch and — unlike for the women’s marathon a week before — the sun was shining. Londoners, other Brits and the huge numbers of foreign aficionados in town flocked to the course to try to catch a glimpse.

And a glimpse — if they were lucky — was all that they could possibly have got. I had a privileged view from the lead vehicle but those on the side of the road might not have seen that much. They were crowded in up to 12-deep on either side: lucky ones crouched against the railings with other ranks pushing hard up against their backs; individuals climbed trees, lamp-posts and on to the top of bus shelters. Behind them people clung to park railings, stood on the ledges of buildings, garden walls, balconies above and anywhere else imaginable. I had never seen anything like it.

But that was a loop course of a basic 12.9km, presenting only 25800m of barrier to line up against. In fact it was considerably less than this because of parts of the course that were restricted like the start-finish, a section under a tunnel and where the course was narrowest. Other parts were run in both directions, reducing the length of barrier available for those stretches by 50%. In all it’s unlikely there could have been more than 20000m of barrier available along which to line up. So for a million people to have been watching they would have to have been 25-deep on both sides of the road. In London we don’t have pavements that are wide enough to accommodate anything like that number of people.

What does a million people in one place look like? That was the crowd estimate for the ‘Je suis Charlie’ solidarity demonstration held in Paris on 11 January 2015. For once it may not have been much exaggerated. TV cameras were placed high up to get a perspective but what can only be described as a ‘sea of humanity’ filled the picture to the horizon, blotting out pretty much everything else from view.

The Wikipedia entry for the New York City Marathon [whose “public” authorship probably includes people trained in the Fred Lebow School of Statistics] currently claims that: ‘Each year nearly two million spectators line the course’. O-kay… but how nearly is nearly? Maybe off by 90%?. As Fred might have said in other circumstances: ‘Gimmeabreak’.