There are 20 AIMS members in Italy: as many as in marathon-mad Japan and more than any other country. What makes the Marathon so popular there? Alessio Punzi, former Communications Officer of the Rome Marathon, offers his insight 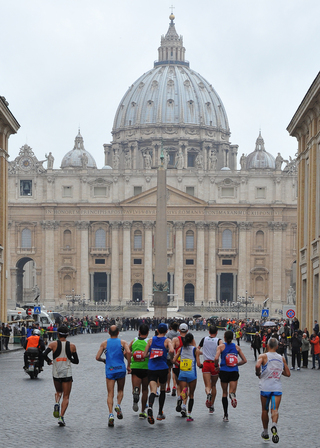 Italian road runners are inherently marathoners, probably dating back to Dorando Pietri and the aura surrounding his legendary non-win at the 1908 London Olympics. Dorando’s is the founding myth of generations of marathon runners. Equally iconic is Abebe Bikila’s flame-lit triumph in the marathon at the 1960 Rome Olympics, arguably the climactic moment of the first Games ever broadcast in Italy.

The mass ‘running boom’ that spread around the world from the USA reached Italy thanks to a collection of world-class victories: Gianni Poli in New York in 1984; Orlando Pizzolato there in 1985 and 1986; Gelindo Bordin at the 1988 Seoul Olympics. These continued in the 1990s with Giacomo Leone in New York in 1996 and Franca Fiacconi there in 1998. All of them contributed to investing a whole new meaning to the discipline and with the media trumpeting their feats “marathon” became a buzzword.

Thanks to the Italians’ successes in the eighties and nineties the NYC Marathon became hugely popular among the masses, and a handful of travel agents with business sense made the Italian contingent into one of the largest national groups in the New York City Marathon. In 2004, Stefano Baldini’s 2004 Olympic Gold in Athens just added to the momentum.

So mainstream is the event in Italian popular culture that the concept of “marathon” and that of “running” are often synonymous. Even today, to most Italians unfamiliar with road running, every race is a marathon. “Come and run our 10km marathon” is a common invitation found in advertisements for lower-tier events.

Many major Italian cities had started marathons in the early 1980s and these were often subsidised by the local government. This peaked in the 1990s with the ‘Rome-Marathon-as-we-know-it’ seeing the light in 1995. In retrospect this can be seen as a successful attempt by the then Mayor Rutelli to make Rome a running capital to rival New York itself.

All over the country cities fell in love with marathons. They brought prestige and visibility. Economic impact studies were yet to come let alone any data-based analysis of the public health benefits of physical activity. Yet every mayor felt they had to jump on the marathon bandwagon; every town wanted their own 42.2km event. Some succeeded: Rome, Turin, Florence, Venice, Milan; some struggle: Naples, Bari; and some became defunct.

In my personal opinion there are too many marathons in Italy. Simply because no mayor would settle for less and because local promoters are often so passionate for road running that they feel they have to stage a marathon, the queen of road races.

The ability of a runner to do a marathon is a scarce commodity. Most of them can run just two a year. As the big marathons enrich their offering participation will increasingly focus on the big city marathons. This is a global phenomenon and will make life harder for small town marathons. They’d probably be better off if they adapted themselves to meet the market’s demands rather than staging solipsistic, expensive marathons which are uselessly disruptive for the cities in which they are located and only boast a few hundred dispersed racers.

The market is changing though. Commercial outfits like RCS Sport are introducing new event formats (Colour Run, Electric Run, Fisherman’s Friend StrongmanRun Italia, etc.) which are providing more options. But the hard-core runner will always look at classic half marathons and marathons. The “competitive” attitude of Italians is legendary. For as much as they do it for recreational purposes they all love to look and behave like pros.

Much to the benefit of running brands and event organisers, new runners are joining the movement: more youngsters and significantly more women, both with a different approach to the event. More for fun and health than obsession with the stopwatch and veterans looks.
AIMS membership raises the profile of an event by acting as a legitimisation. A large part of this is having an AIMS-certified course. Italians do marathons to set personal bests, even if it means shaving 30 seconds off a 4:30 time. Nothing is more upsetting to them than finding that the race in which they did so well was actually several hundred metres short. AIMS affiliation adds value to an event and, especially in the case of small-scale marathons, this helps the organiser score political points with the local administrators.

The AIMS label gives minor races the opportunity to get exposure and opportunities to promote themselves at reasonable cost. The AIMS booth, and the possibility of sending race representatives there, is an attractive membership perk.

Mass events and tourism go hand in hand. AIMS membership is appealing because of the touristic possibilities of so many Italian cities. In Rome we stressed the leisure component of the Rome Marathon experience because we knew we would help the city’s economy most by attracting runners from overseas: those most likely to stay a few days and spend more money in restaurants, hotels and shops.
The decision to stage a marathon only seldom follows a strategically thought-out plan. Mostly they are the impromptu endeavours of zealous volunteers. Only at a later stage, if initially successful, are they squeezed into the city’s marketing toolbox with public officials taking credit for them and organisers letting them do so.

City-subsidised events, which included pretty much every marathon in Italy until the current spending review, must be integrated with public policy objectives. City officials should ask themselves: what can a marathon do for my city? I would suggest they can help to change a city’s image, promote tourism growth, improve public health, develop sport, expand social inclusion and increase educational and employment prospects.

Events are not a substitute for policy. Sporting events are policy tools, and race organisers need to work a bit harder when it comes to understanding how they can support policy. In this respect Turin (unsurprisingly, a recent Winter Olympic host) is certainly doing well.

Race organisers specifically target foreign participants but the results vary hugely. Rome boasts some 5,000 participants from abroad (who contribute an estimated EUR40m to the city’s economy over race weekend according to a 2010 study). Florence and Venice have in percentage terms even more foreign runners by virtue of their unique positioning. But minor races can’t really be considered “destination marathons”. What they typically do is list all the countries represented among their entries and brag about it a bit at the pre-event press conferences. This is a legitimate and understandable effort to score political points, even if all they may have are a few locally-retired English expatriates. The point is that it’s probably harder to attract five Germans to Messina than five hundred of them to Rome.

Some organisers get support from their local tourism authorities in publicising their race. The Regione Veneto has supported its regional marathons (Venice, Verona and Treviso) in their marketing campaigns for years. But we have a long way to go to reach that smooth integration you can see in some exemplary cases elsewhere, such as Vienna.

The host city often supports its marathon through VIK sponsorship: certainly in Rome we didn’t have to meet the full cost of the services we received from the city. This included the post-race city clean-up, extra shifts for hundreds of policemen, etc.
While the cities definitely recognise the benefits a marathon brings to them it is often their citizens who don’t want to accept the traffic disruption a marathon race inevitably causes. Shutting down a city for a race of a few hundred participants is asking too much. We all love small, intimate, authentic races but you can’t close the city centre for them. They should be staged within parks. The heart of the city has to be exclusively for major events. You don’t want to upset motorists, shop owners and city residents by blocking traffic every other Sunday — and the City doesn’t want to upset its electorate.

For climatic reasons (summers are too hot to run marathons, winters too unpredictable) most marathons in Italy, in common with most temperate countries, are scheduled during two relatively restricted periods of the year: March to May and September to November. Organisers of races which attract lots of tourist runners tend to steer away from the peak tourist seasons of late April to May, late September to October and the winter holidays to avoid fully-booked hotels and high prices. By contrast smaller events in minor cities tend to capitalise on the “holiday effect” by offering their marathons at times of year most convenient to tourists.
Rome, Florence and Venice are so universally known and loved that their marathons, as big as they are, only account for a fraction of the overall volume of tourists in the season. It is a complicated picture but cities and organisers are increasingly working together to schedule their events in order to avoid clashes and generate the maximum possible impact.