Bavaria’s largest marathon offers a scenic and fast route that takes runners past Munich’s most famous landmarks. Countless highlights follow one after another during the 42195m before reaching the finish line in the Olympic Stadium. The finish is an emotional place as runners cross the line to the cheers of the crowd. 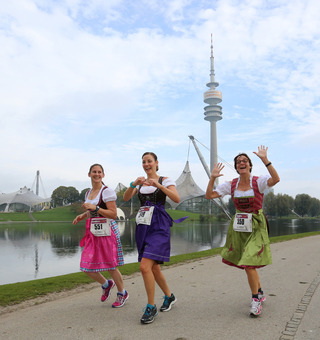 Excitement; high hopes; happiness; these are the emotions that will fire runners in the 30th edition of the Munich Marathon when the starting gun sounds on 11 October 2015. At the fourth largest marathon in Germany runners can choose between four distances: marathon, half marathon, 10km and the marathon relay.

The weekend starts with the three-day Expo, which will be held in the Olympic Hall this year for the first time. Bavaria’s largest marathon offers a scenic and fast route that takes runners past Munich’s most famous landmarks. Countless highlights follow one after another during the 42195m before reaching the finish line in the Olympic Stadium. The finish is an emotional place as runners cross the line to the cheers of the crowd. They’ve reached their goal: their apprehension melts away as aspiration becomes achievement, hope turns into happiness.

The Munich Marathon originated in a café in Munich’s Schwabing district on 11 July 1982. An army lieutenant, two Munich advertising moguls and the man who would later be technical director, Ali Schneider, proposed holding an Olympic City Marathon Munich. They suggested a course on the original Olympic marathon route in Munich from 10 years earlier. The New York Marathon had been run through all five boroughs of that city from 1976; Berlin Marathon had broken out of the Grunewald to go city-wide in 1981, hard on the heels of the new London Marathon that year.

Growing numbers of recreational runners wanted to tackle the marathon distance.
It didn’t take long for the group to realise their plan. On 8 May 1983 Munich held its inaugural marathon with the starting line on Spiridon-Louis-Ring and the finish line on Coubertinplatz in the Olympic Stadium precinct. Next year the numbers had doubled to more than 5000 and the race was enjoying a growing resonance among the city’s residents with more than 65,000 spectators along the course. By the fourth running on 4 May 1986 the field had swelled to 7236 participants, and spectators lining the route were estimated at 250,000.

In the seventh edition on 23 April 1989 the Olympic-City-Marathon drew nearly 10,000 runners and home favourite Herbert Steffny posted a highly respectable course record of 2:11:30.

In the 1990s the event slipped into the doldrums after Ali Schneider left the organisation. Both participant and spectator numbers dropped and organisational problems added to the troubles which led to a temporary suspension of the event.

Following a four-year break (missing three editions) the marathon re-emerged under a new organising team led by Race Director Gernot Weigl. Under the new name media.marathon munich, a new route was devised and the date shifted from early May to autumn — one week following the end of the Oktoberfest. This boosted the number of participants and spectators significantly. Top athletic performances also helped as two Kenyans broke the course record with sub-2:10 times.

Return to an Olympic Stadium finish
In the following years changes were made to the concept of the event including the establishment of a three-day marathon expo, maintaining the finish line in the Olympic stadium, and broadening the base to make the race more appealing to amateur runners. The central focus of attention would be on “local heroes”.

The media.marathon munich reached a breakthrough in 2003 when for the first time the number of runners surpassed 10,000. This showed that the marathon had regained its broad appeal within the running community. A further milestone was reached during 2006 when it was renamed Munich Marathon and incorporated the German national championships.

The marathon relay was added in 2007. Teams of five runners split the 42195m route into individual legs of 5.5km, 11km, 10km, 8km and 7.6km. A timing chip served as a “baton” fastened around the ankle that had to be passed from runner to runner.

For the 25th anniversary of the Munich Marathon the Trachtenlauf was initiated, with runners wearing traditional folk costumes. This international friendship run on the day before the marathon aimed to encourage participants of all nations and federal states to run the 4.5km course in their respective folk costumes. In the first year, 500 participants jogged the Trachtenlauf at a leisurely pace with no timekeeping.

On 11 October 2015 the Munich Marathon celebrates its 30th birthday. More will be on offer to the 23,000 runners than just athletic performance…