Arne Gabius has decided that the second marathon of his career will mark a return to Frankfurt, the city where the 34-year-old made such a scintillating debut at the distance a year ago.

Gabius faces strong opposition in pursuit of record in Frankfurt 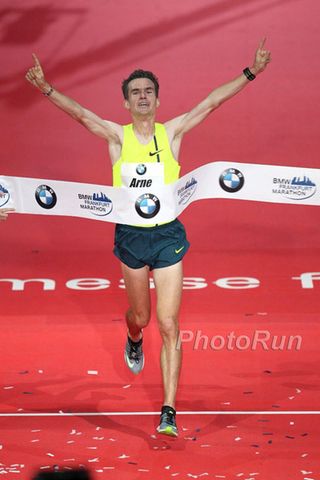 Arne Gabius has decided that the second marathon of his career will mark a return to Frankfurt, the city where the 34-year-old made such a scintillating debut at the distance a year ago.

He will return to the distance classic beside the River Main for this year’s race on October 25. His debut the previous year was impressive indeed with 2:09:32 and now he has set his sights even higher, taking aim at the German marathon record of 2:08:47, set in 1988.

He can expect a tough challenge from his African rivals in Frankfurt, including Alfers Lagat of Kenya, who has a best of 2:07:11 and Ethiopia’s Getachew Terfa (2:07:32). The Frankfurt Marathon and its Berlin counterpart are the only German events with the accolade of the IAAF Gold Label, the highest category of road racing awarded by the world governing body.

The Frankfurt organisers expect around 15,000 participants for the race which finishes with the spectacular run into the Festhalle and entries are still open at www.frankfurt-marathon.com

Last year Arne Gabius thrilled fans along the course and the worldwide television audience with the quality of his debut marathon. His time of 2:09:32 was the fastest by a German for 24 years and placed him fourth among the national all-time list. In a world-class field he finished in a highly creditable ninth place.

“I’ve great memories of the Frankfurt Marathon, I can still picture the scenes in my mind. Frankfurt has a fast course and the timing of the race in the season suits me perfectly, everything came together last year in Frankfurt,” explained Gabius, who lives in Stuttgart, about his decision to return to the Frankfurt Marathon.

The race director Jo Schindler was delighted that they had succeeded in bringing the current number one German marathon runner back to the city: “We’ll do all we can to provide him with the best conditions in support of his ambitions.”

An additional incentive for the leading German runners is that Frankfurt includes the National Marathon Championships this year. “It’s great that the German Championships are finally being given the kind of high profile in Germany which only marathons in Frankfurt, Berlin and Hamburg can offer at present. I’m delighted that this means I’ll also have the chance to become German champion,” said Arne Gabius, who will be attacking the German record of Jörg Peter when the runner from Dresden achieved 2:08:47 in Tokyo in 1988. “My aim in Frankfurt is to run 46 seconds faster than my debut. I’ve spoken with many top runners and they say the second marathon should be a considerable improvement on the first,” explained Gabius.

Jo Schindler regards the decision of Arne Gabius to return to Frankfurt as “Confirmation of our work and that Arne really wants to repeat what he experienced with us in 2014.” Gabius was in demand with other autumn marathons both in Germany and abroad. “But it’s only on Frankfurt’s fast course that he has the chance to become German champion and achieve a strong finishing position in an IAAF Gold Label Race,” said Schindler.

Arne Gabius has no doubt he’s made the right choice: “I’ll be going to Frankfurt with a good feeling because everything went well last year. I was very impressed by the smooth operation of the organising team and everything about the race.” In the immediate future the track is his priority, since he will be competing in the 10,000m in the World Championships in Beijing this Saturday.

Additions to the already strong elite field are expected. At present the leading African contenders are Alfers Lagat of Kenya, whose personal best of 2:07:11 was set when finishing third in Eindhoven last year. Another sub 2:08 performer is Getachew Terfa (2:07:32). The Ethiopian set his personal best in winning the Xiamen title in China in 2013, won the Rome Marathon in 2:07:56 the same year and finished third in Berlin with 2:07:41 in 2009. Active in 2015 have been the Kenyan Anthony Maritim who ran his fastest time of 2:09:39 to win the Linz Marathon while Ethiopia’s Kaleb Keshebo finished second in 2:09:44 in Enschede.