The unique experience of running at midnight, in the very first minutes and hours of the New Year, under a sky full of fireworks turning the night landscape into a scene from a fairytale. 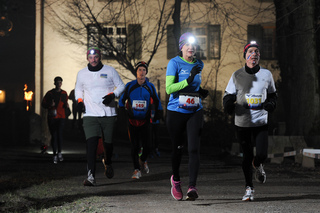 This marathon is not about running fast times. It is about the unique experience of running at midnight, in the very first minutes and hours of the New Year, under a sky full of fireworks. If you are as lucky as the runners in the most recent edition, there will be fresh snow alongside the course mirroring the moonlight and turning the night landscape into a scene from a fairytale.

Besides the full marathon, a half marathon and a quarter marathon a marathon relay is also offered. Because the race consists of 10.5 kilometre laps, runners can decide which distance they will complete even after having started. The entire course is beside Zurich’s River Limmat so is almost as flat as a pancake, despite being held in a country famous for its mountains.

The start and finish are located inside a sports hall. Participants run through it at the end of each lap allowing friends and spectators to follow the race closely and celebrate the arrival of the runners. And there is always a reason to celebrate: no matter how fast or slow they run, everyone will have set a best time for the year and the the winners officially record the World’s Leading Time – at least for a few days until the next marathon is held.