With a reputation as “a marathon organised for runners by runners”, the Maratón Powerade Monterrey has grown to become the second largest marathon in Mexico. 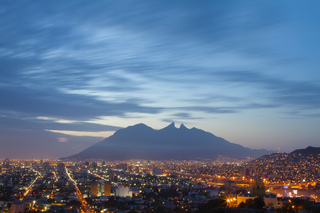 Monterrey is the state capital of Nuevo Leon in the northeast of Mexico about 220km from the border with the US. The marathon is always held on the second Sunday of December, a time when the weather is particularly favourable for running: temperatures vary between 8–22C and humidity is around 50%.

The city is an important industrial, business and educational centre recognised as enjoying a high quality of life. The population stands at 4.5 million in the entire metropolitan area. Monterrey is known as the “City of the Mountains” for being located between the iconic Cerro de la Silla, the majestic Sierra Madre Oriental, and the upstanding Cerro de las Mitras.

With a field that has grown to 7000 runners the marathon has since 2001 been organised by the Asociación de Clubes de Corredores de Nuevo León (Running Clubs Association of Nuevo Leon) composed of 74 running clubs. With a reputation as “a marathon organised for runners by runners”, it has grown to become the second largest marathon in Mexico.

The Paseo Santa Lucia, a scenic navigable canal 2km long, the splendid Macroplaza and the picturesque Fundidora Park, along with malls, hotels and restaurants to suit all budgets, have made Monterrey one of the most visited cities in Mexico – especially by runners.